In the summer of 2000, audiences enjoyed world music on warm Sunday evenings at the Fairfield Amphitheatre, organised by The Boîte for the City of Yarra. The Boîte would continue to develop the Fairfield Amphitheatre Series for a further seven years, presenting some of Melbourne’s finest, diverse musicians to strong audiences at this outdoor venue by the Yarra River.

In 2004, on a balmy November night, the Fairfield Amphitheatre would become a party venue as 400 Boîte members and supporters gathered to celebrate 25 years of The Boîte. Treated to a free concert, featuring the music of the Melbourne Millennium Chorus production of Rongo performed by both the Chorus directed by Stephen Taberner, and other artists from the concert, the crowd also enjoyed the music of Kavisha Mazzella, Carl Pannuzzo, Gorani and Joe Malatji, before taking to the dance floor to the African rhythms of Soukous Ba Congo.

In 2001, The Boîte worked with Australian Volunteers International, to bring Cinco do Oriente to Melbourne from Timor Leste, to perform with the Melbourne Millennium Chorus in A Concert for East Timor. The Boîte Director, Roger King, had a long-standing personal interest in Timor, having been a member of the Australia East Timor Association since the organisation’s first meeting in response to the invasion of East Timor (as it was then known) by Indonesia in 1975. At a time when the people of East Timor had endured significant violence and political turmoil in their struggle for independence, the concert was a fundraiser with proceeds donated for community projects in Timor Leste.

Under the artistic direction of Diana Clark, the concert brought together these special international guests, with a line-up of prominent Australian musicians including the Dili Allstars, Deborah Conway and Kavisha Mazzella. This was the first time that Ego Lemos and the band had toured in Australia and represented a milestone moment in Ego Lemos’ musical career.

In 2001, community support for the Reconciliation movement in Australia had also been gaining momentum. The previous year, hundreds of thousands of Australians had walked over bridges as a symbolic show of support for meaningful reconciliation between Australia’s Indigenous and non-Indigenous peoples. In a second Melbourne Millennium Concert for 2001, The Boîte presented Winter Dreaming – A Concert for Reconciliation. Featuring artists Kev Carmody, Richard Frankland, Lou Bennett, Carol Fraser and many more, the concert provided an artistic avenue to explore some of the issues behind reconciliation and promote understanding.


Listen to Richard Frankland perform Who Made Me Who I Am at the Winter Dreaming Concert.


The Boite · Who Made Me Who I Am, Richard Frankland
Kavisha Mazzella and the Melbourne Millennium Chorus perform All God’s Beggars, at Flight: Concert for Refugees.


The Boite · All God's Beggars, Kavisha Mazzella And The Melbourne Millennium Chorus


In 2002, for the fifth Millennium Chorus The Boîte felt compelled to develop a concert focused on refugees. As Roger King described on the CD release of the concert:

For 23 years The Boîte has been privileged to work with hundreds of migrant artists, many of whom are refugees. We feel deeply ashamed that on this land of enormous wealth we are reduced to incarcerating some of the world’s most vulnerable people behind razor wire fences in the desert.

Flight was a unique production, presenting a narrative about the experience and plight of refugees through both music and storytelling – ‘the combination of an experienced and able choir singing songs around a powerfully moving theme, threaded into a unified work by Arnold Zable’s storytelling, took the whole performance to a new place.’

In 2003 The Boîte undertook a new innovation – adapting Arnold Zable’s award winning book The Fig Tree, into a concert. Arnold Zable and a further 17 artists performed at the National Folk Festival in Canberra, to an audience of 2500 people. The Fig Tree CD won Screensound Australia’s Folk album of the year award and Arnold Zable was interviewed on BBC World Service reaching an international audience of 160 million listeners as a result.

In developing the concert, Arnold Zable provided musician David Krycer (of Klezmania) with a copy of his father’s poem, A Friendly Hand, to put to music. In Arnold’s words: ‘The poem personifies an immigrant’s sense of alienation in new lands, and celebrates the healing power of friendship.’ Arnold felt that David Krycer’s adaptation ‘captured the poem’s essence’ and that Freydi Mrocki (also of Klezmania) sang it ‘with a smile in her voice.’

Listen to A Friendly Hand (A Freyntlekher Hant), from the Fig Tree album, Freydi Mrocki (vocals) and David Krycer (guitar and double bass)

The contribution of Costas Tsicaderis

Sadly, renowned musician Costas Tsicaderis, who had performed at Boîte events since the 1980s and was a key contributor to the production, passed away the following year.

Following his death, the Boîte worked with Costas Tsicaderis’ family and friends to produce a tribute album to Costas – The Mighty and the Humble. As was described in the CD booklet:

‘The 1986 cassette recording, Costas Tsicaderis – Live at the Boîte, a humble production, is the only album ever released devoted to Costas Tsicaderis’s music. Costas deserved better. Production of the Mighty and the Humble inspired a community of people who knew Costas to devote great skill, enormous energy and much love to the creation of the CD. Being part of this has been a privilege. Costas, we hope we have done you justice.’

Hear Costas Tsicaderis and fellow musicians Spiros Papoutsis and Jacob Papadopoulos perform The Mighty and the Humble, from the tribute CD of the same name.


The Boite · The Mighty And The Humble, Costas Tsicaderis, Spiros Papoutsis And Jacob Papadopoulos

On the 1st of June 2004, (marking 25 years since the first Boîte concert in Melbourne) The Boîte staged the inaugural Boîte Schools Chorus, an adaptation of Flight performed by the Millennium Chorus in 2002. The concert brought 300 students from 17 schools across Victoria to the stage at Hamer Hall, to perform songs exploring refugee issues in Victoria, alongside professional artists, to an audience of their families and peers. 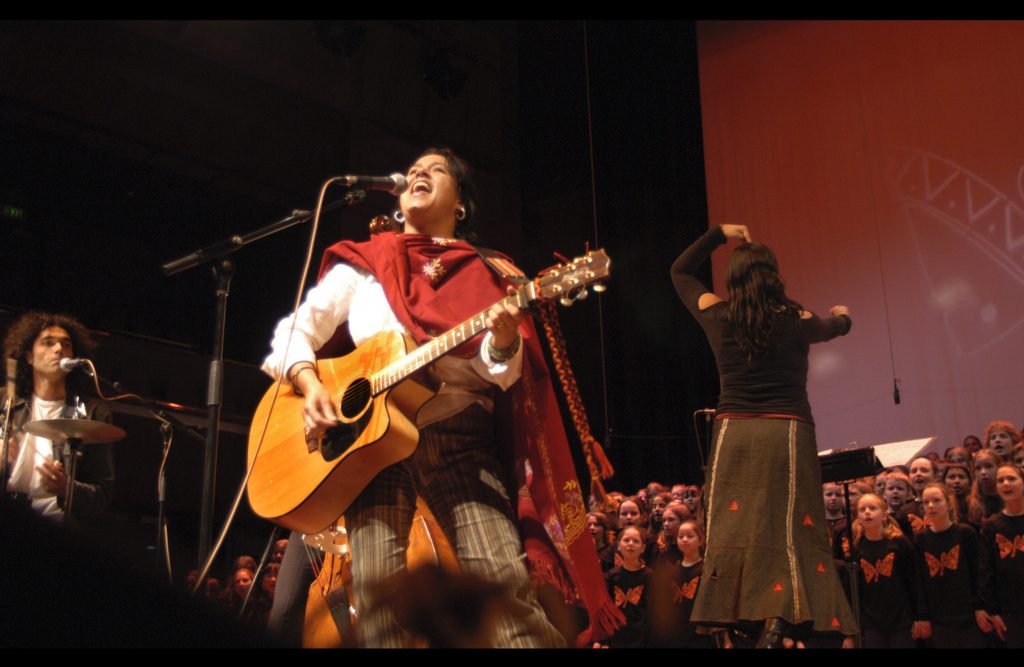 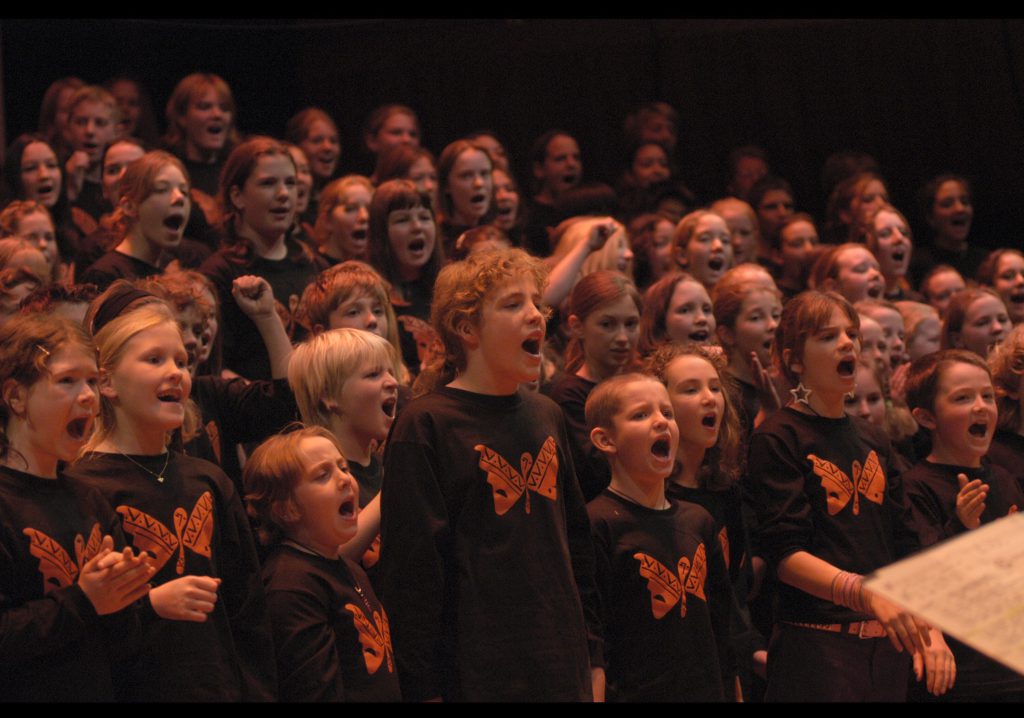 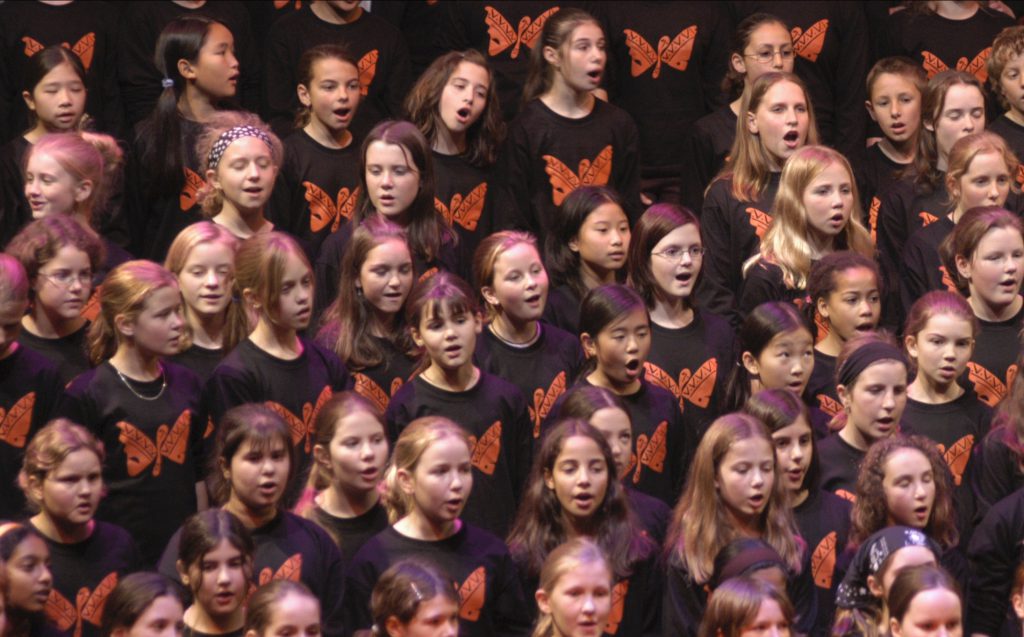 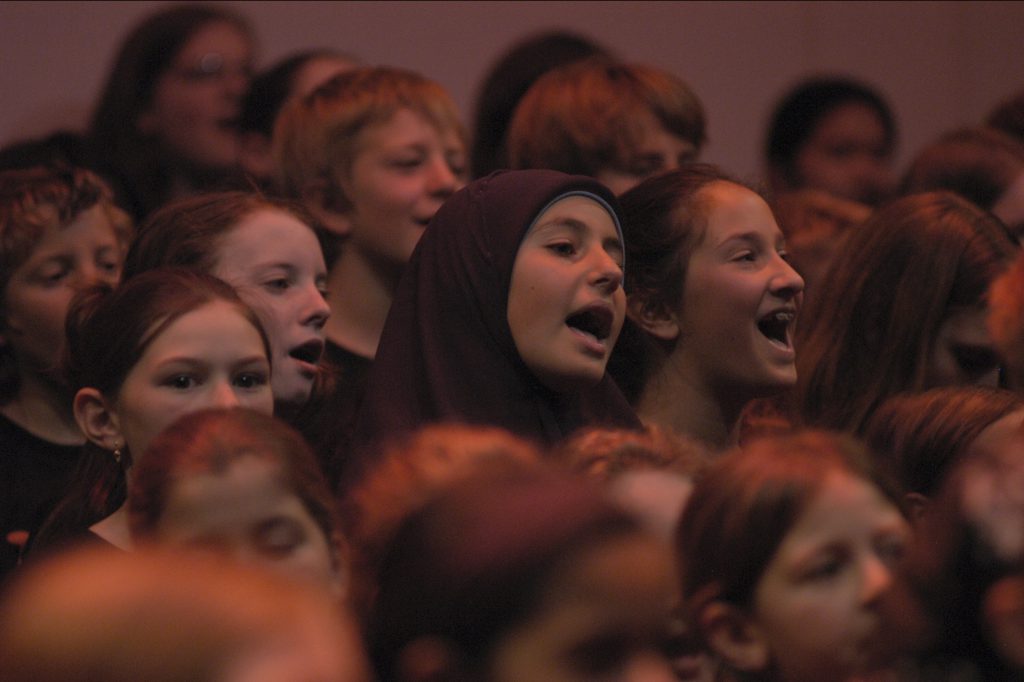 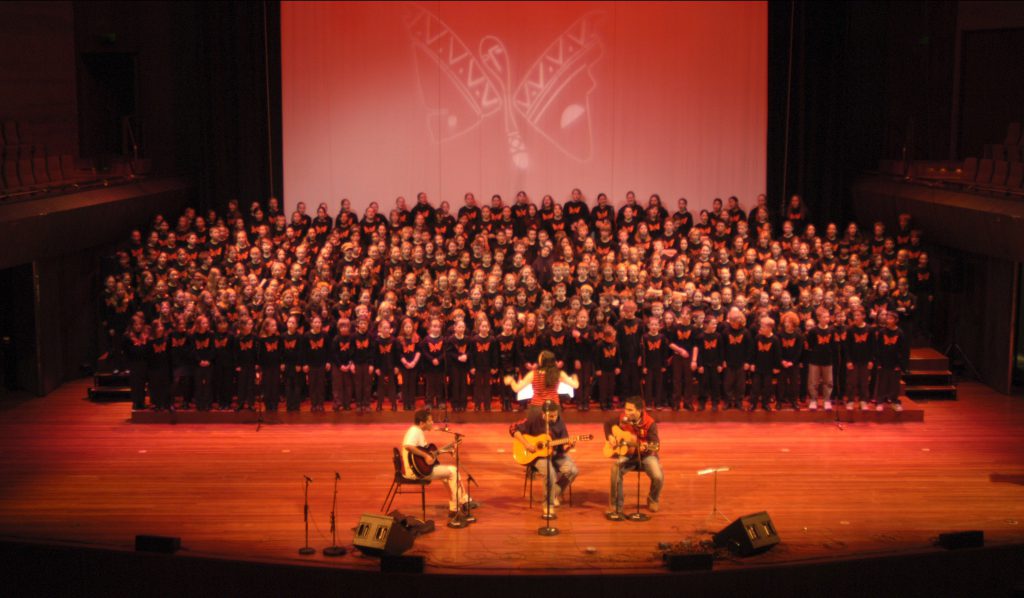 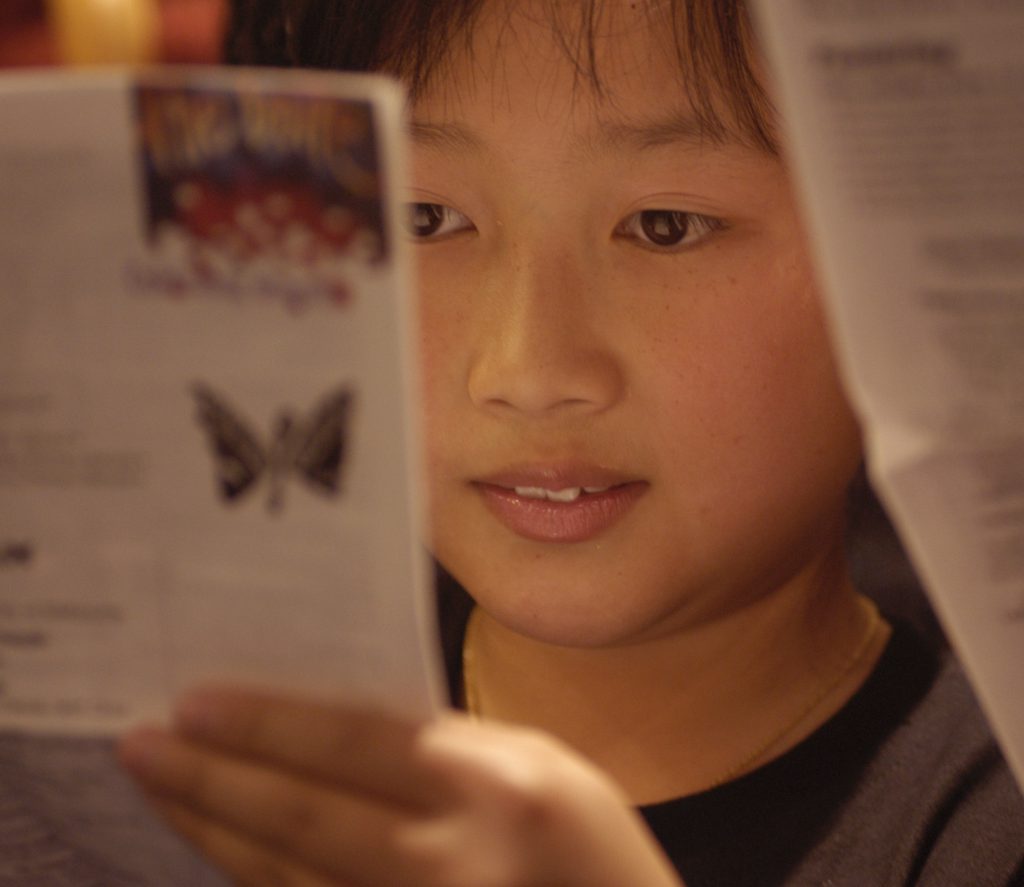 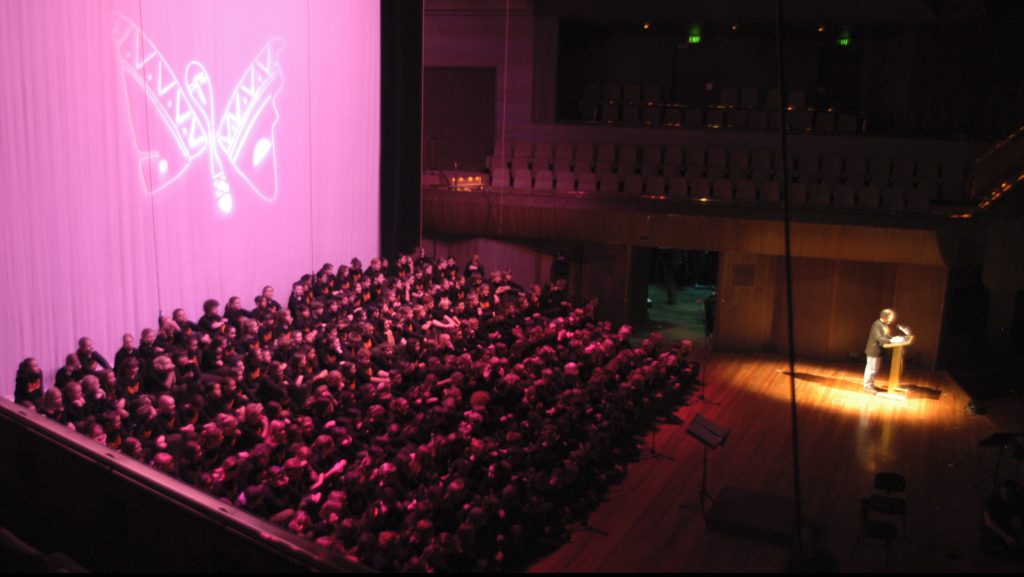 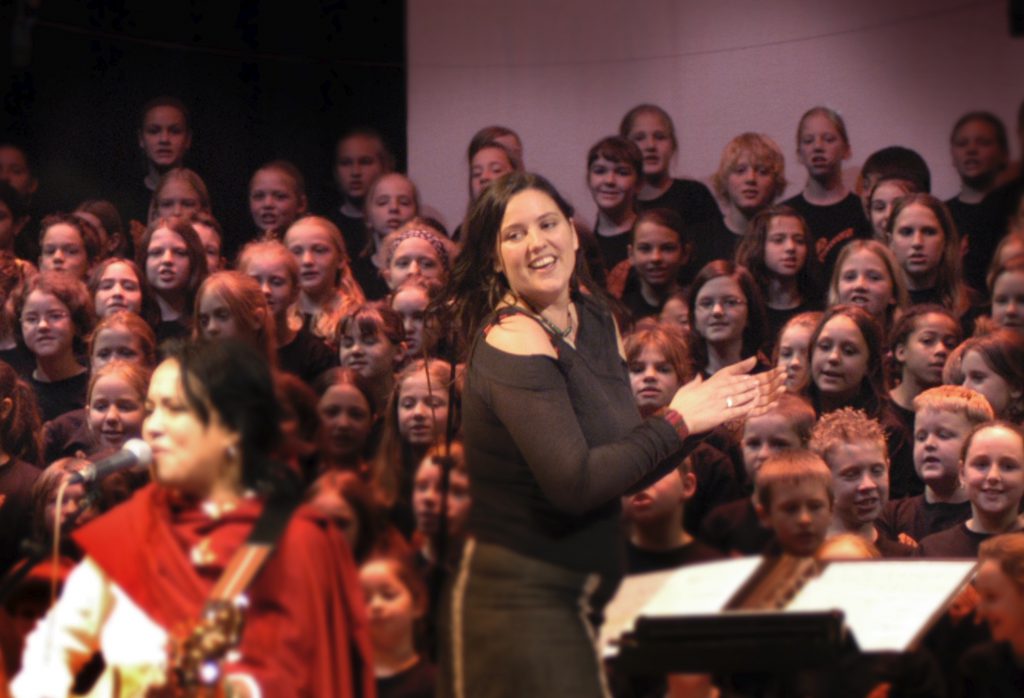 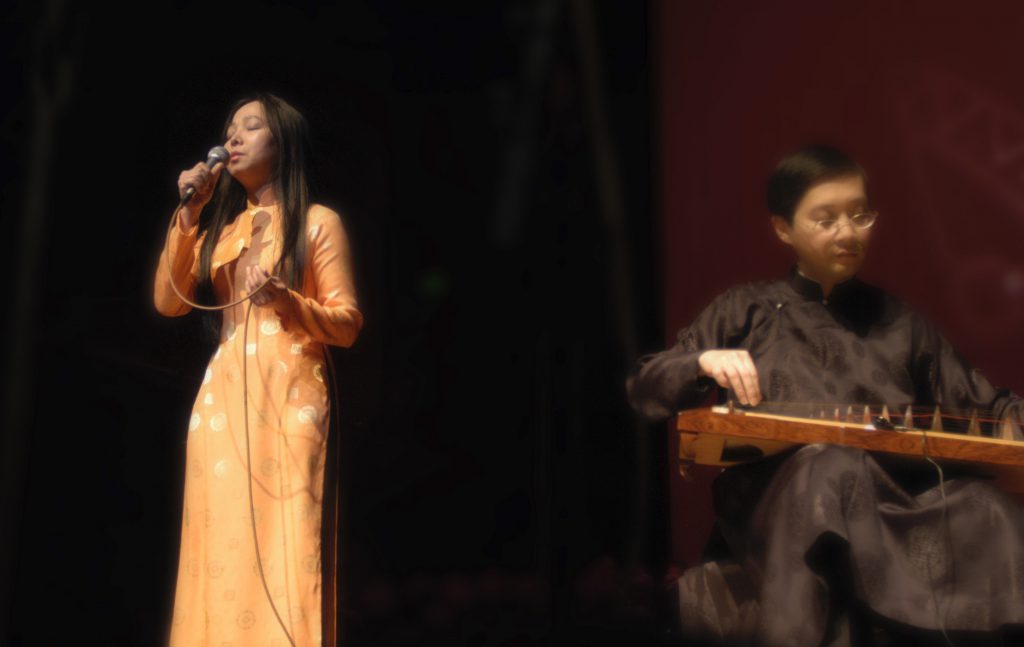 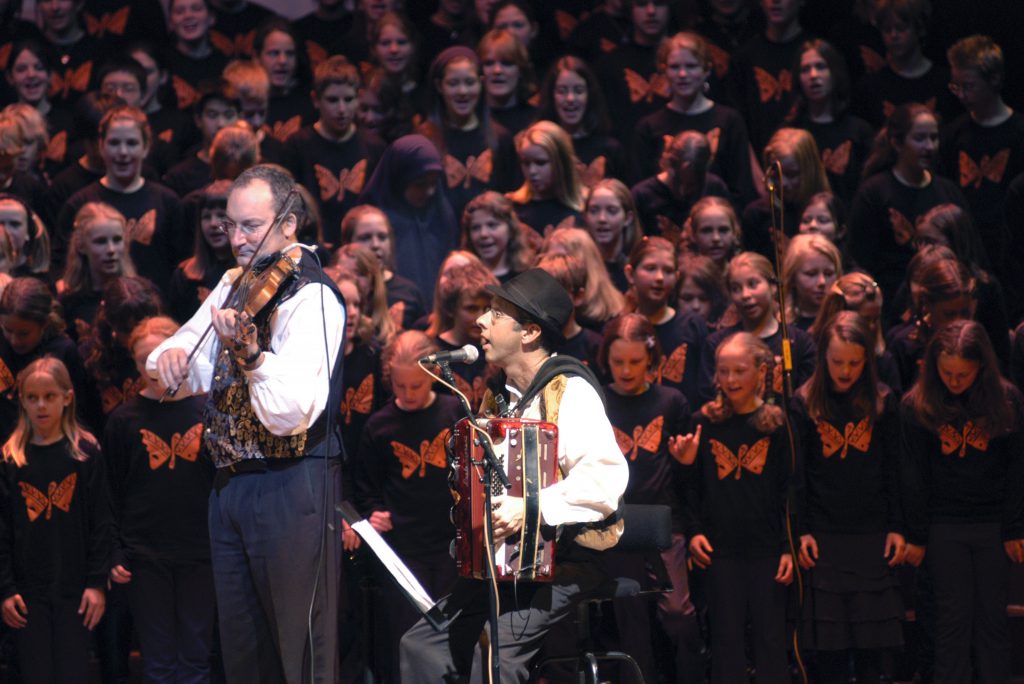 Since 2004, the Boîte Schools Chorus has remained an enduring feature of The Boîte program and has engaged thousands upon thousands of students in an inclusive, un-auditioned musical experience that builds confidence and broadens their horizons and supports the development of performance and inter-personal skills. 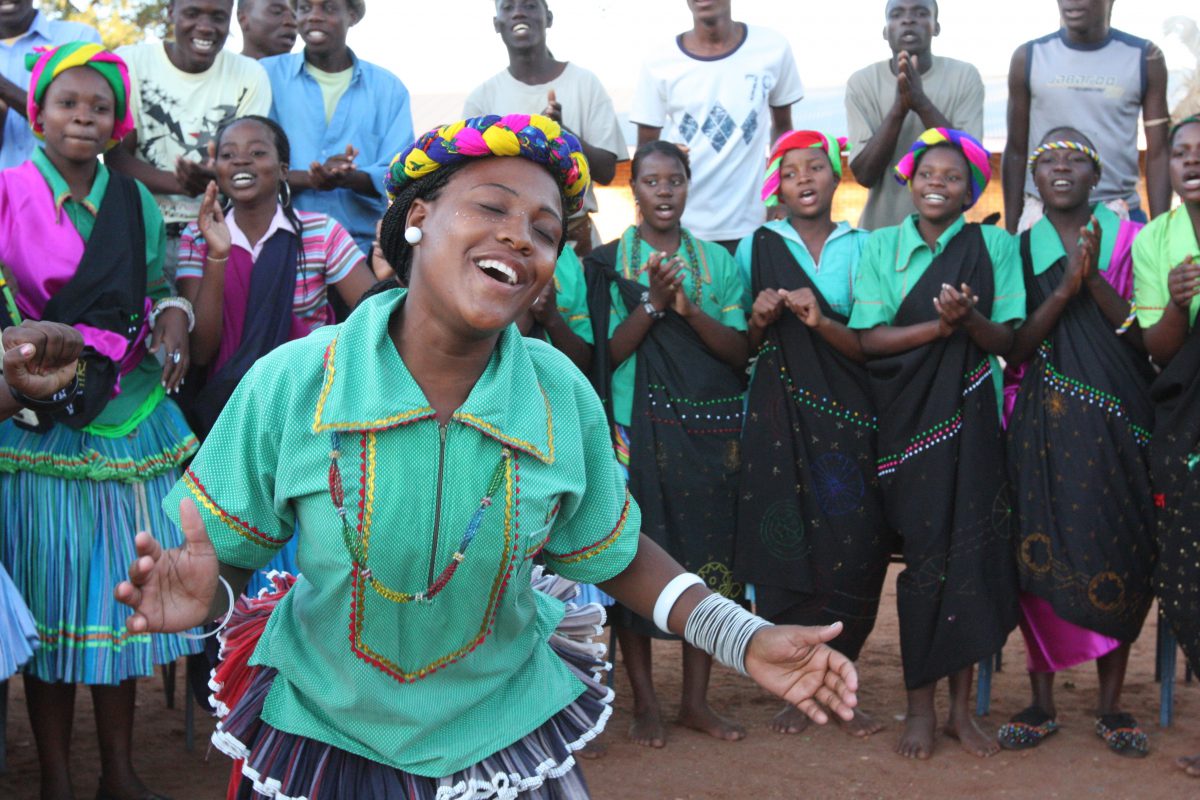 At the suggestion of Andrea and Valanga Khoza, and under their artistic and musical direction, The Boîte undertook the Limpopo Project, bringing students from the award winning Mafumani Secondary School Chorus from Giyani, in the Limpopo Province, South Africa to tour in Australia and feature in both the Millennium Chorus as well as The Boîte Schools Chorus in 2008. The project also involved producing a recording of the Mafumani Secondary School Chorus for the first time, taken on site in South Africa and providing the Chorus with the produced CD as a resource.

On Sunday 31st May, 2009 – on the eve of the anniversary of the first concert in 1979 – 1,200 people gathered at the Great Hall of the National Gallery of Victoria to celebrate 30 years of The Boîte. The event began informally, with three whimsical musical processions in the surrounding streets – led by Mal Webb on trumpet (from Flinders Street Station); Phil Carroll on the Turkish zurna (along St Kilda Rd from Southbank Boulevard); Evan Davies on bagpipes, (striding through Alexandra Gardens) to join together at the Gallery entrance, before being greeted by the Kurdish Dance Group in the Gallery Foyer. As the crowd had settled into the Great Hall and were welcomed to Country by Aunty Joy Murphy, they were treated to a concert since described as a  ‘musical soundscape…representing the past 30 years.’⁠

Stephen Taberner, as Artistic Director of the celebration, led the 30th Birthday Choir as they performed pieces he had composed for the event, alongside a program of 15 diverse performers, reflecting both some past Boîte events as well as emerging artistic talents. The concert was released as a DVD.