In 1991 The Boîte hosted the inaugural Singers’ Festival in Daylesford, recognising that singing provided a great medium for supporting participation in the arts.

The weekend festival program, encompassing singing workshops, performances and culminating in a final concert event, has historically targeted singers of all age ranges and abilities. A feature of the program has always been a focus on providing unique opportunities to hear and participate in both culturally and stylistically diverse singing.

In 2016 the Singers’ Festival was hosted for the first time in Melbourne at the Abbotsford Convent, a decision influenced by experiences of both flood and nearby fire encroaching on the festival in past years. 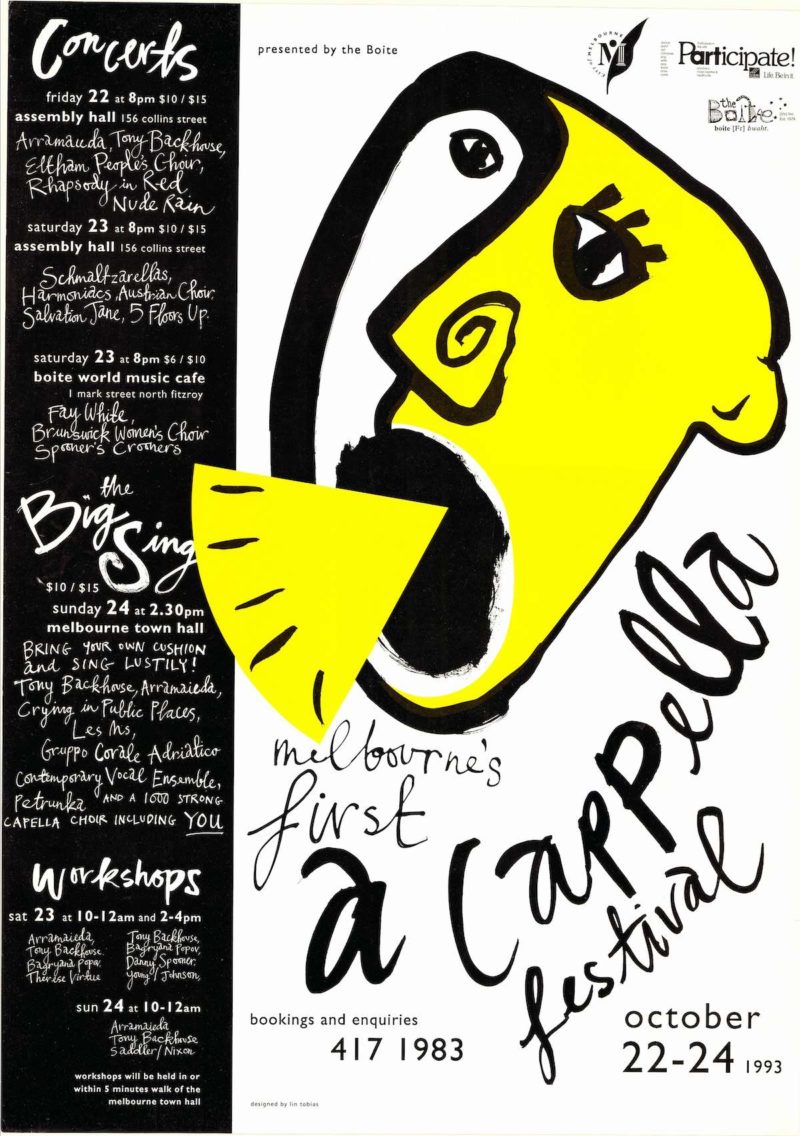 A Cappella Festival Poster from 1993

In 1993, The Boîte hosts its most ambitious project to date, to stage the Melbourne A Cappella Festival. Singing and community choirs were continuing to invoke strong community interest, as participation at The Boîte’s existing Daylesford Singers’ Festival Program attested. The A Cappella Festival had been run successfully in Sydney and when encouraged by esteemed choir leaders Tony Backhouse and Melanie Shanahan to bring the festival to Melbourne, The Boîte seized the opportunity. As described in The Boîte 1993 Annual report:

‘Notable Sydney- based performer Tony Backhouse, director of the Cafe of the Gate of Salvation gospel choir, gave significant support to both workshops and concerts. Four-woman group Arramaieda also from Sydney, thrilled audiences at concert performances and in packed workshops.’

The festival showcased a great variety of a cappella styles and traditions. Emphasis was on small groups, such as Nude Rain, Schmaltzarellas, and Rhapsody in Red, but some larger groups also appeared, including the Women’s Bulgarian choir – Petrunka, the Italian Gruppo Corale Adriatico, and the Austrian Choir.

The program offered four concerts, including a packed Singer’ Night at the World Music Cafe and a final all-out afternoon of singing at the Melbourne Town Hall.’

Hear The Austrian Yodel Trio perform Der dahoam zschad is, as featured on the Australian A Cappella CD.


The Boite · Der Dahoam Zschad Is, The Austrian Yodel Trio


The Boîte continued to run the Melbourne A Cappella Festival until 1997, before introducing a new festival event in 1998 – the Winter Festival, consolidating elements from the A Cappella Festival with components of another Boîte event the World Music & Dance Festival first hosted by The Boîte in 1996.

The success of the inaugural Melbourne A Cappella festival inspired the first Boîte CD release in 1994, Australian A Cappella – a compilation album of culturally diverse A Cappella groups featuring both traditional and contemporary songs.

Flyer for The Boîte Koori Kafe in 1994

In March 1994, The Boîte announced a new concert series – the Koori Kafé, to take place on the third Saturday of each month at The Boîte World Music Café. Many Koori performers had already featured on the World Music Cafe Program, including Tiddas, Mokoy Bungul Dance group, John Harding, Robert Mate Mate and Ochre, however, the new Koori Café format, coordinated by Di Kilsby, was dedicated exclusively to the presentation of Aboriginal and Torres Strait Islander artists. It also featured an “open stage” segment, where new musicians could perform a song or two to encourage emerging artists.

The Koori Café was launched on the 19th of March, hosted by accomplished poet and activist Lisa Bellear and featured an acoustic set from rock band Blackfire as well as singer-songwriter Peter Rottumah.

The Boîte staff were pleased to report to members that over the seven Koori Café events during 1994, they:

Since its earliest days, The Boîte has had a firm agenda to inform audiences and encourage cross-cultural understanding. In 1997, The Boîte returned to the production of publications (begun with the production of detailed program booklets in the 1970s and 80s) through the launch of magazine 3RD. Named as a dedication to the ‘third sector’ and to reflect the critical importance of the contribution of not-for-profit organisations to the arts and communities, the magazine was broadly focused on presenting content with an emphasis on community arts issues in a culturally diverse environment.

Under the guidance of a small editorial team for each issue, The Boîte produced six issues of 3RD, however funding constraints forced the closure of the project in 1998.

In 1998, The Boîte faced a crisis. Funds had run dry after the withdrawal in October 1997 of the Australia Council grant that had provided The Boîte with its principle income source, creating a devastating funding shortfall for the organisation. Dieter Bajzek, Boîte Chairperson at the time described the challenge this posed as he reflected on The Boîte’s struggle for survival during 1998:

‘Plunged into a sudden and unexpected financial no-man’s-land at the end of 1997, we had to struggle all the way to keep our heads above water. Many friends rallied to our aid – and we thank them sincerely for it – but it somehow never seemed enough. It should be said here and now that if it had not been for the determination and self-sacrifice or our co-ordinator Roger King and Therese Virtue throughout the year, I don’t believe The Boîte could have survived this set-back.’

Coordinator, Roger King voluntarily deferred payment of his salary, the City of Yarra granted free use of the Fitzroy Town Hall and a small grant which enabled the Winter Festival to proceed and The Boîte implemented a survival plan.

An emergency fundraising appeal raised $12,000, central to which was a St Valentine’s Day Benefit Concert. Again, the Fitzroy Town Hall was made available through the support of the City of Yarra, Jeff Stellar provided free sound and artists and workers donated their services to stage a highly successful concert. Artists also donated their time through World Music Cafe benefit nights and a number of people made donations to the organisation.

Through a combination of the tenacity and commitment of staff and the committee, and the generosity of the community, volunteers and artists who donated time and resources, The Boîte had survived what had seemed an insurmountable challenge.

To mark the Millennium, The Boîte undertook a new, innovative project – the Melbourne Millennium Chorus. Melanie Shanahan, as Musical Director, led the development of a concert that featured a 400 voice community choir drawn from across Victoria and performed at the conclusion of The Boîte Winter Festival, in the Melbourne Concert Hall. The Chorus supported performers from diverse backgrounds including Bulgarian, South African, Zairean, Georgian, Italian, Austrian and anglo-Australian, Aboriginal and Maori cultures. 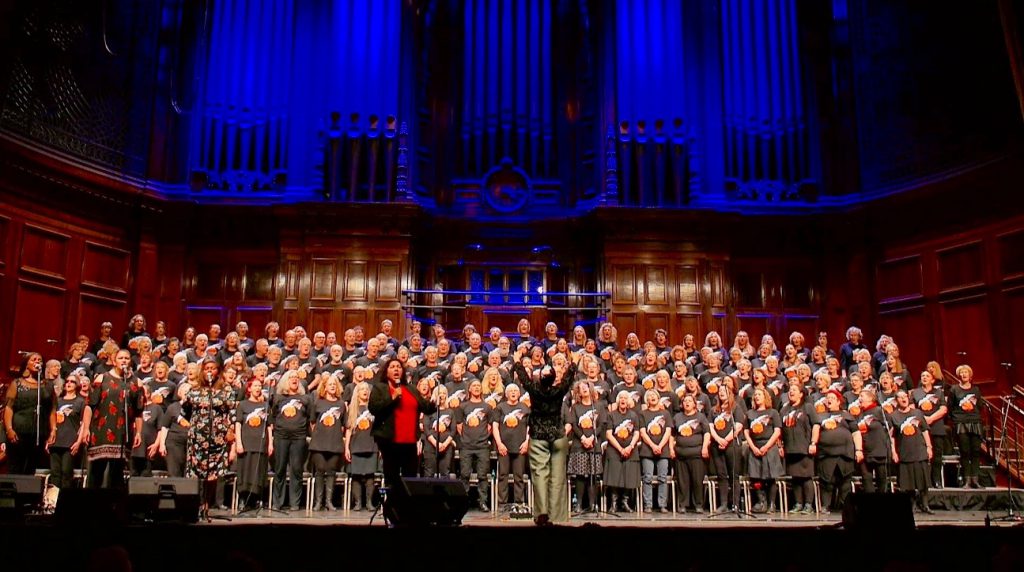 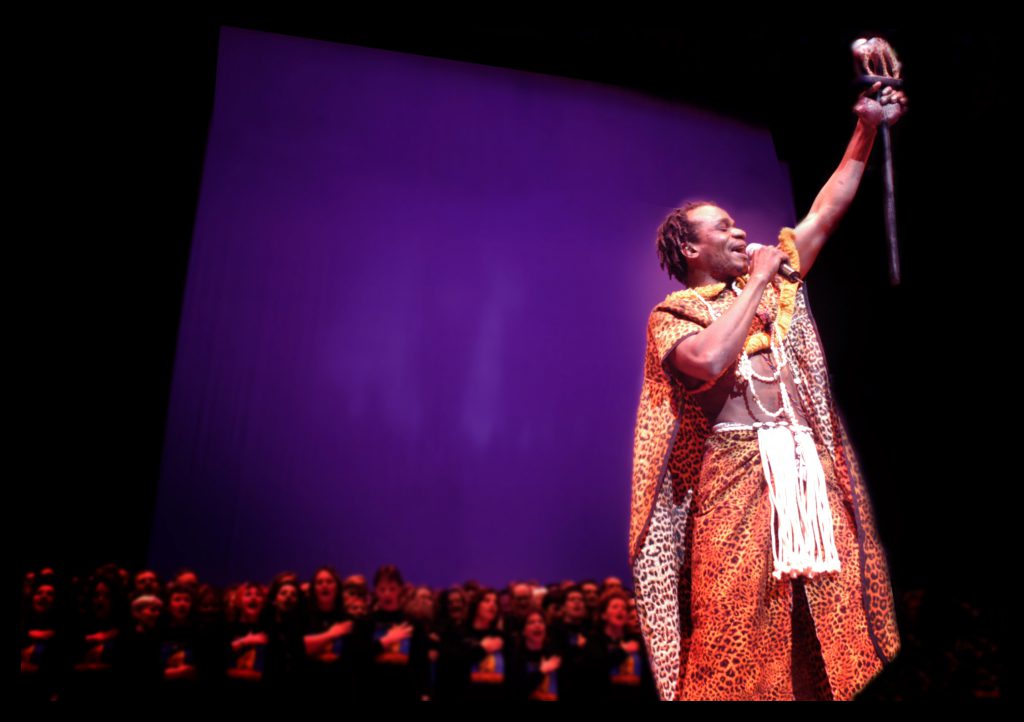 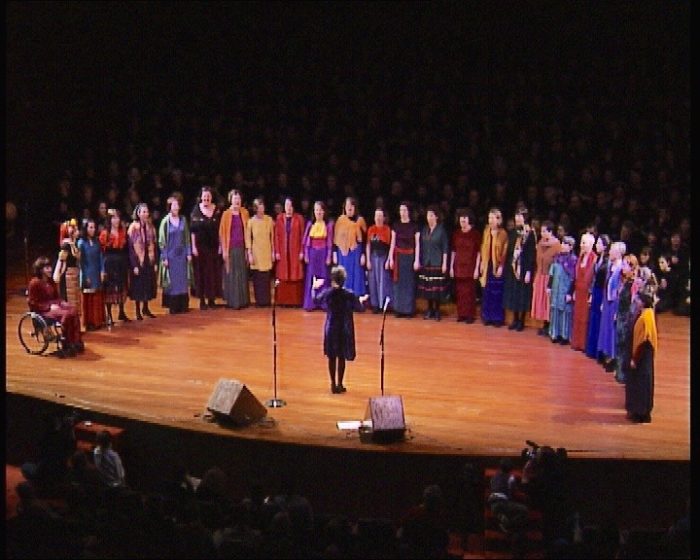 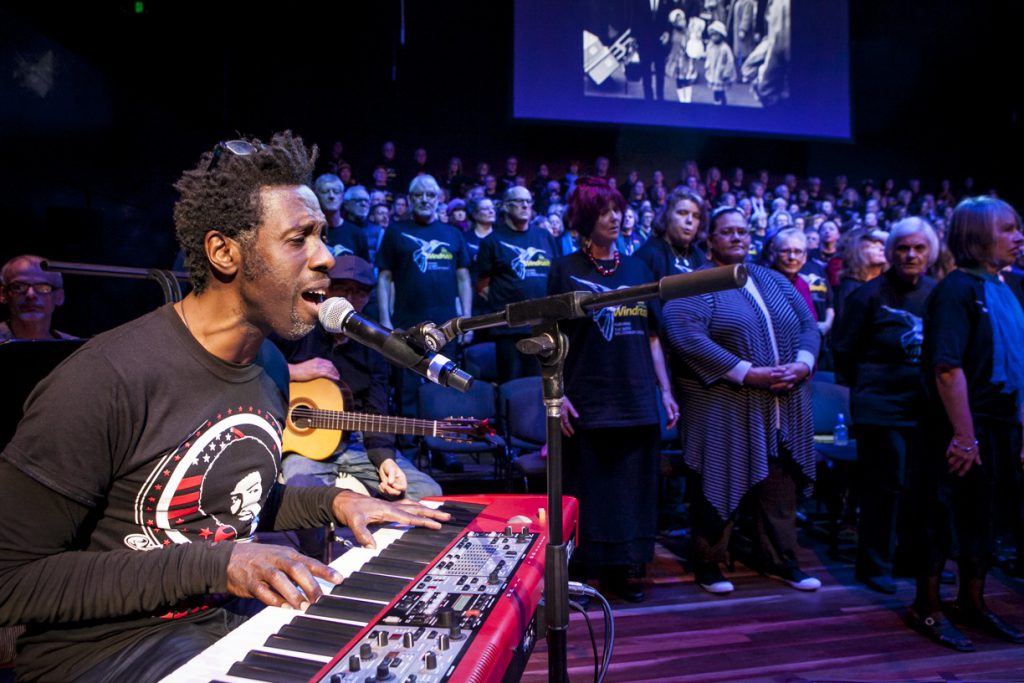 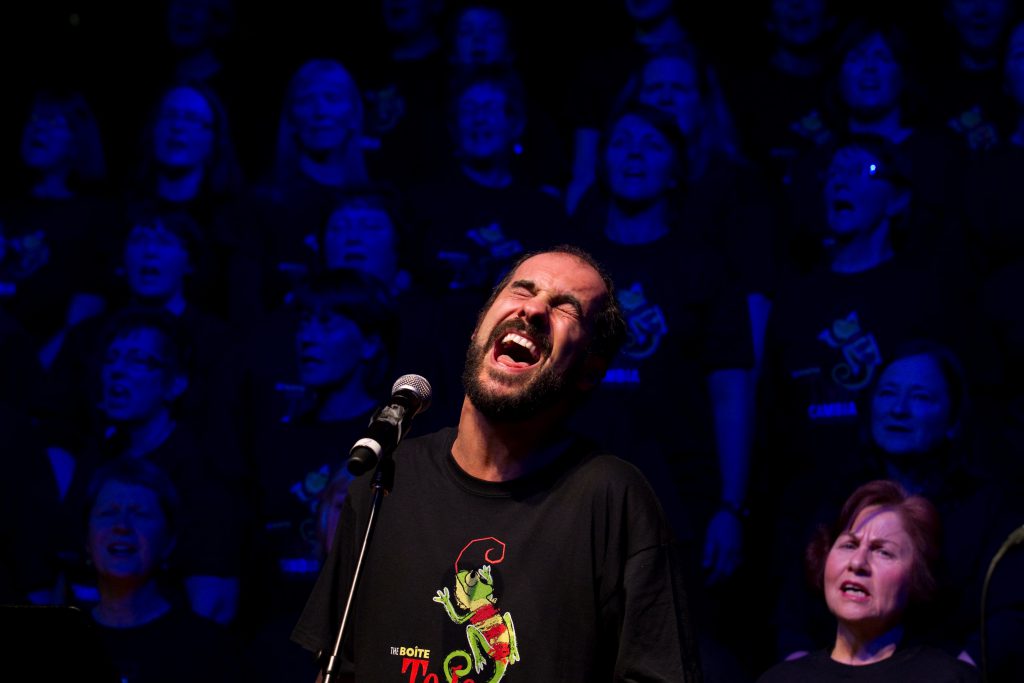 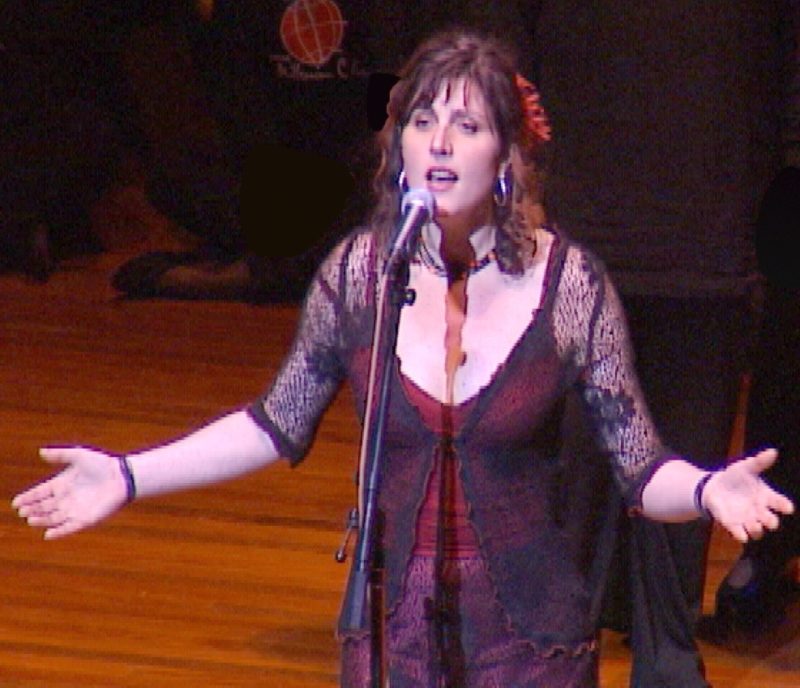 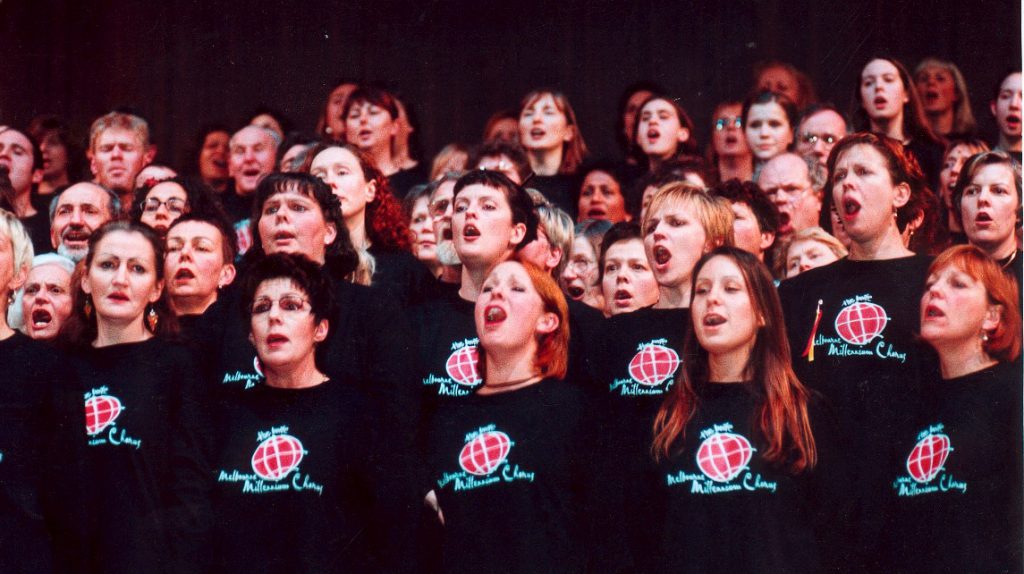 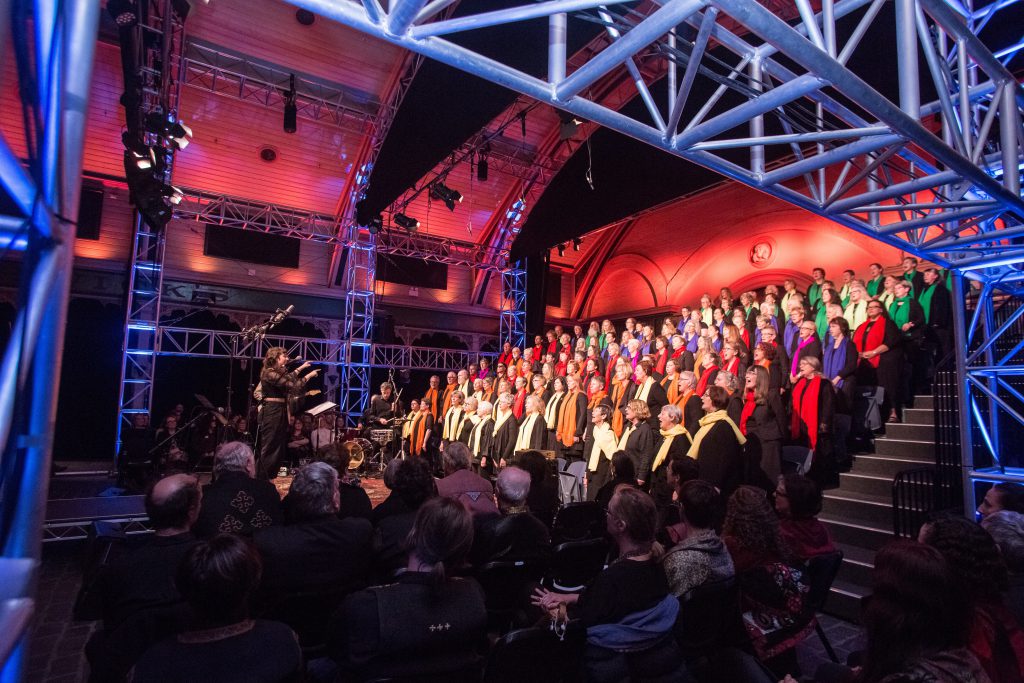 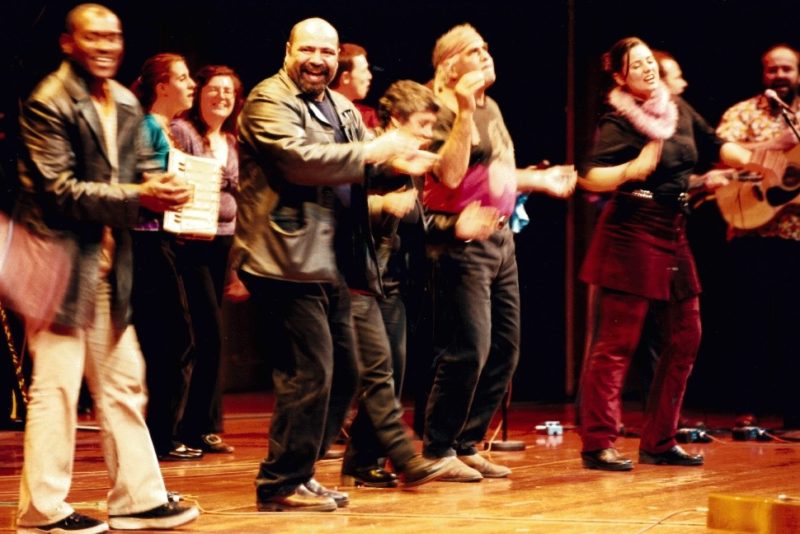 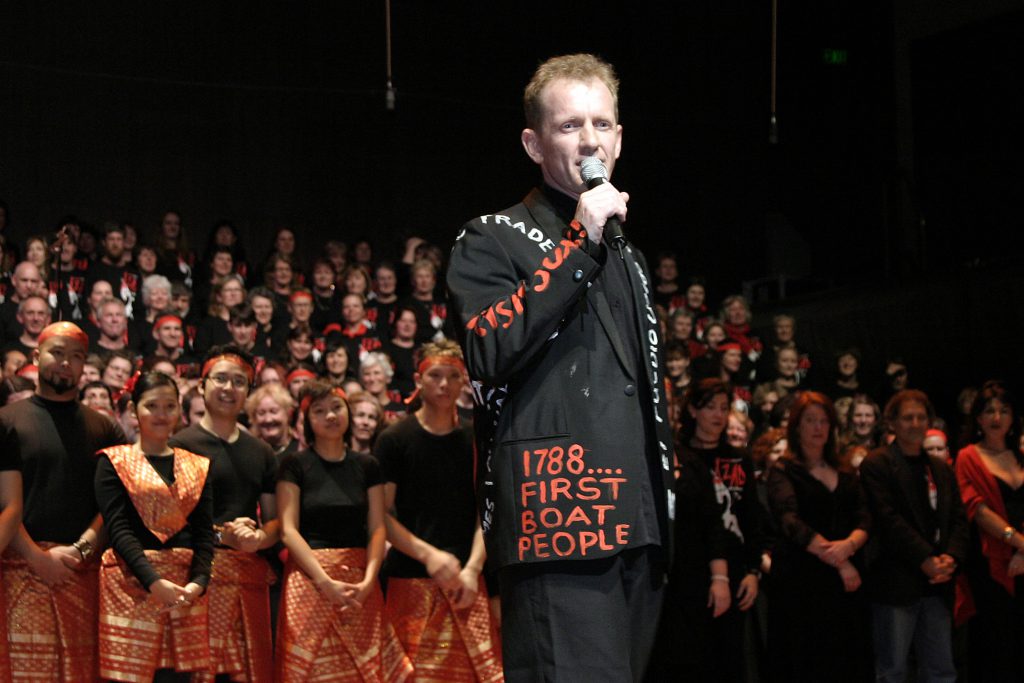 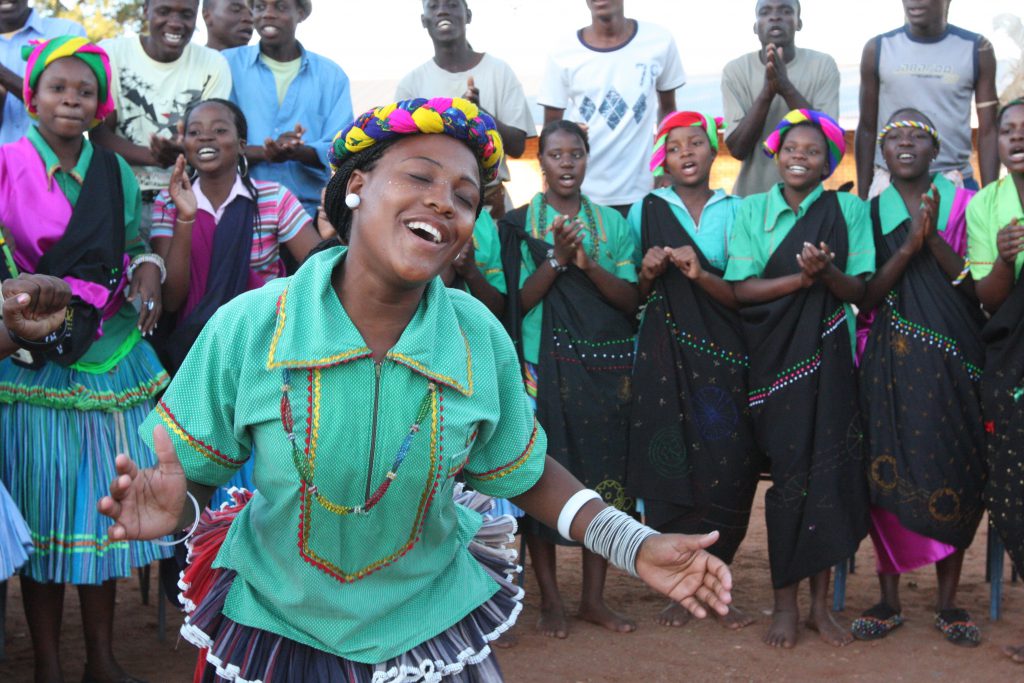 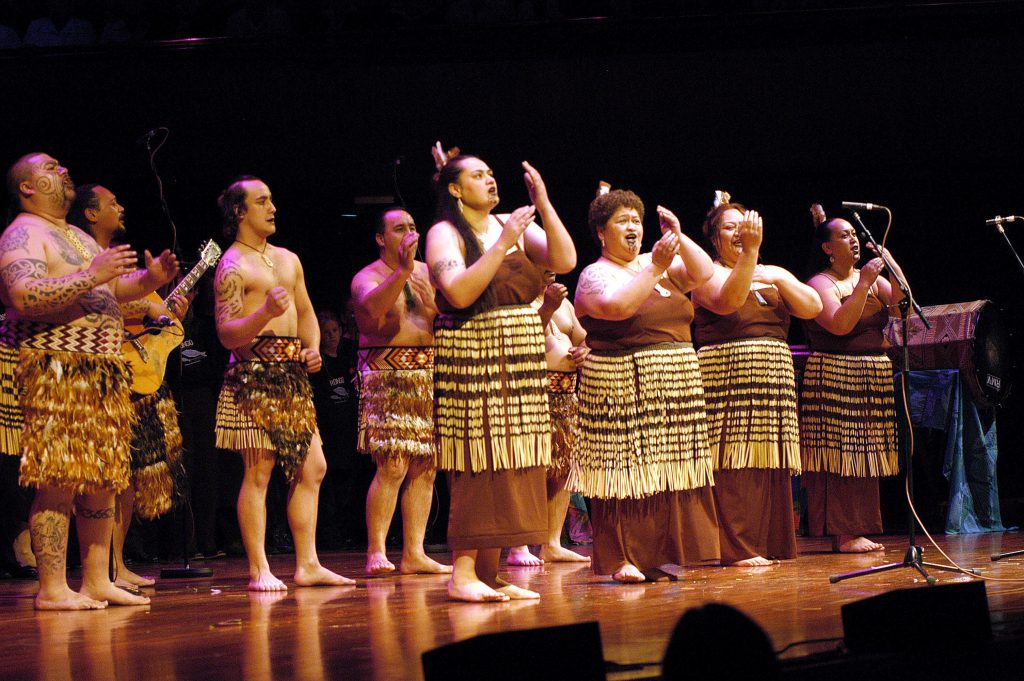 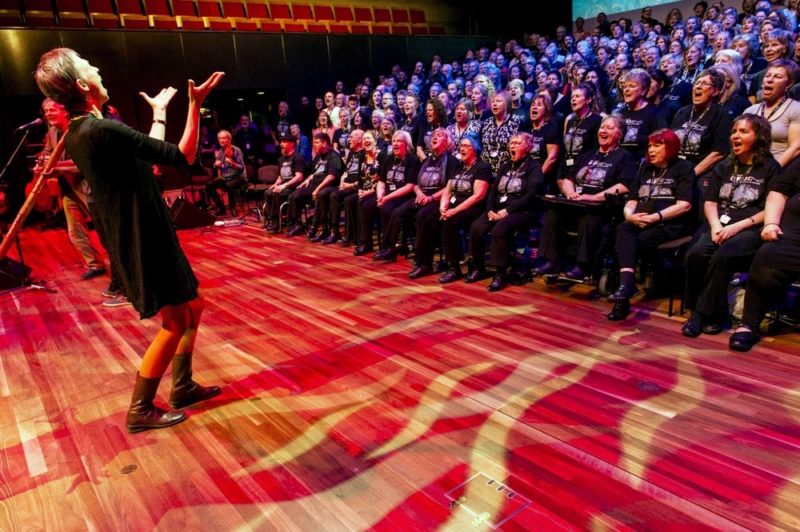 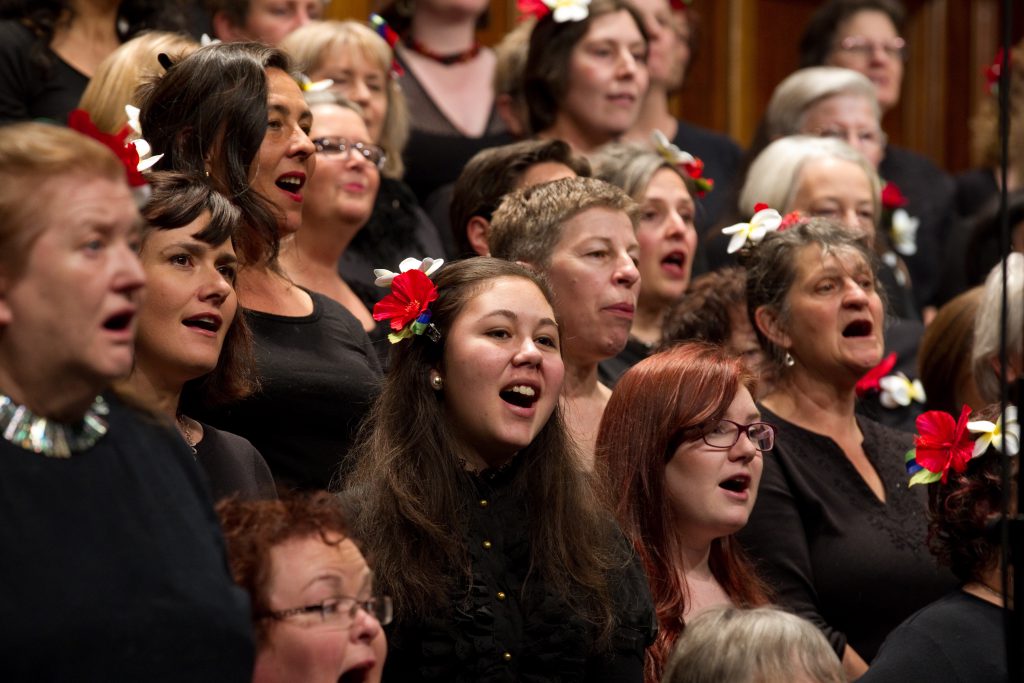 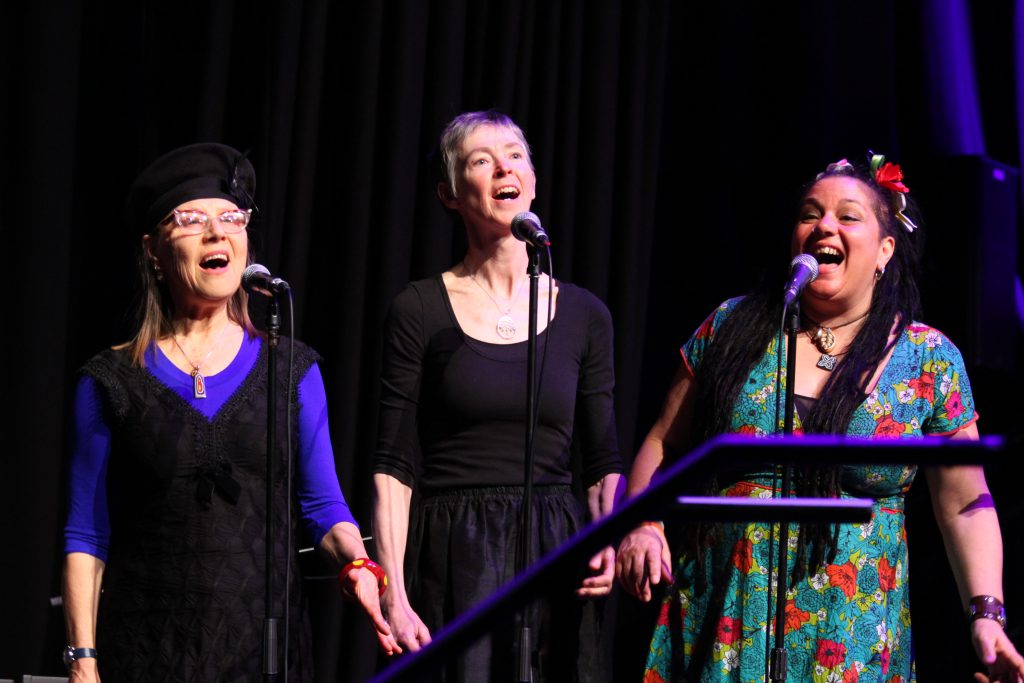 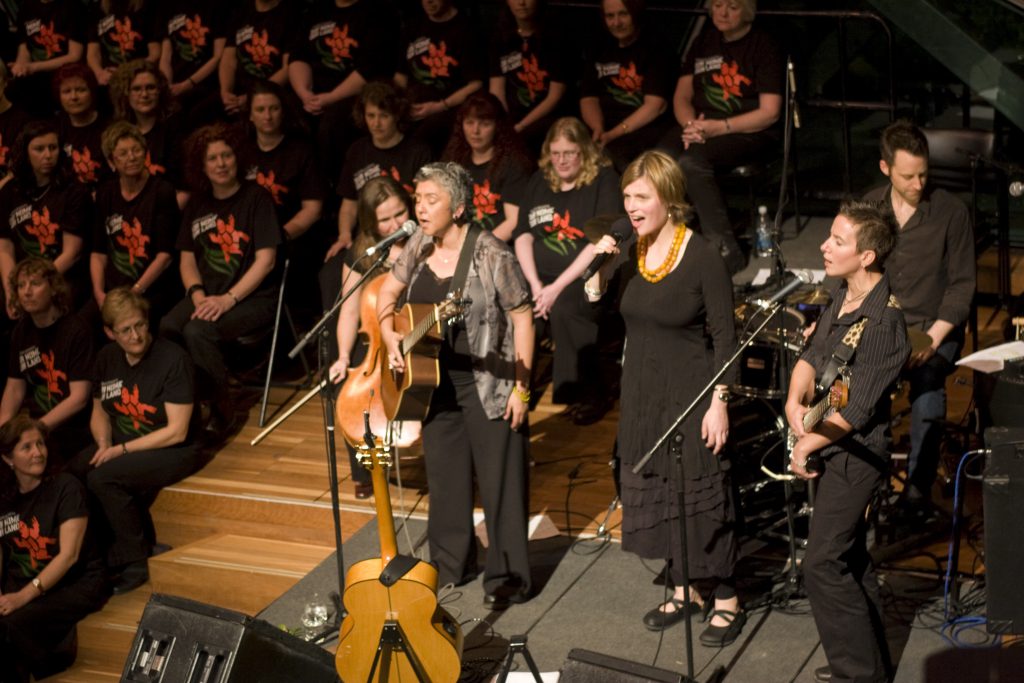 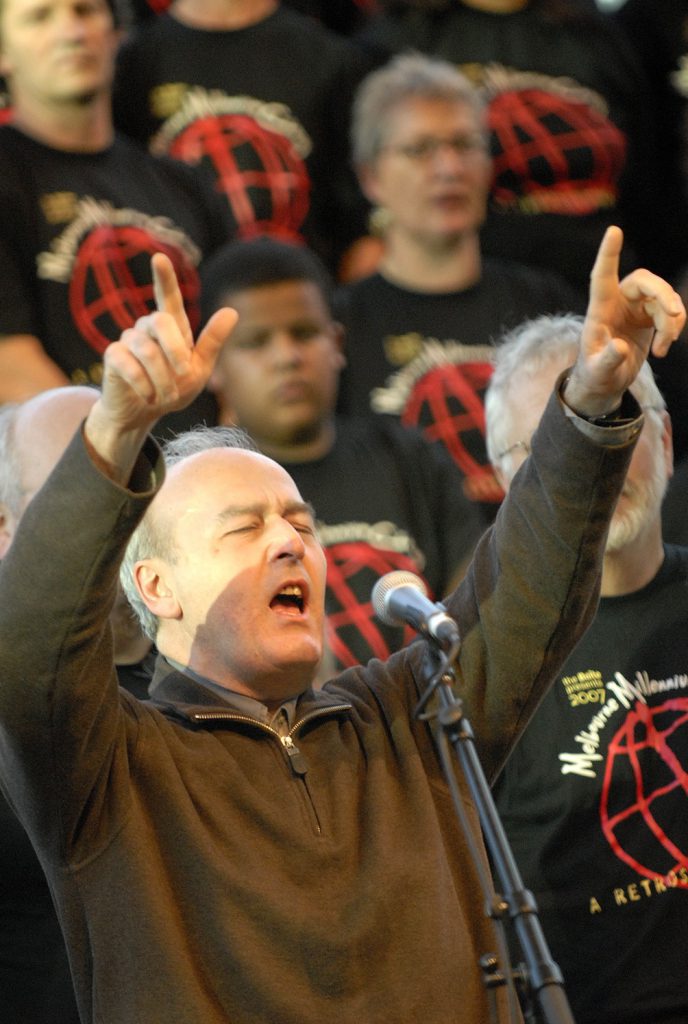 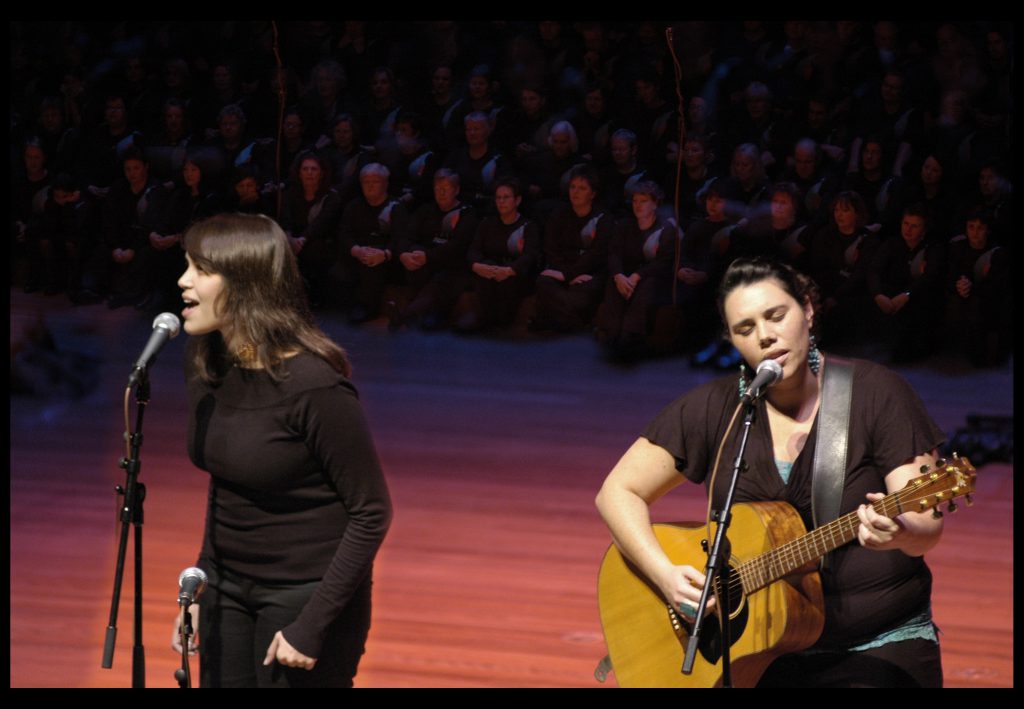 The event attracted an audience of over 2200 people and was financially the most successful single event The Boîte had staged. Referred to as the highlight of Melbourne’s 1999 music calendar in The Age, the success of this first Millennium Chorus ensured it would become a central feature of The Boîte Calendar of events for twenty years.

As described in the the 10th Melbourne Millennium Chorus: A retrospective, DVD and CD booklet:

‘The Millennium Chorus concerts have come to personify multiculturalism in an Australian context, by featuring individual performances from a wide range of cultures, and combining them with a theme, and the enduring presence and artistry of the choir. The entire Boîte production team, and the many performers who have taken part over the years, have created a living expression of community harmony that should evolve and flourish for years to come.‘

The Boîte Millennium Chorus finale So Far, So Close was staged in 2019.