The Boîte presented a free concert, on the afternoon of Sunday February 17, 1980 at the Richmond City Reserve. Developed in conjunction with seven local organisations and communities, the program included performances of Greek, Turkish, Timorese, Vietnamese, South American and ‘colonial music’.

Listen to a Vietnamese artist performing at the Richmond Reserve Concert of Ethnic Music in February, 1980 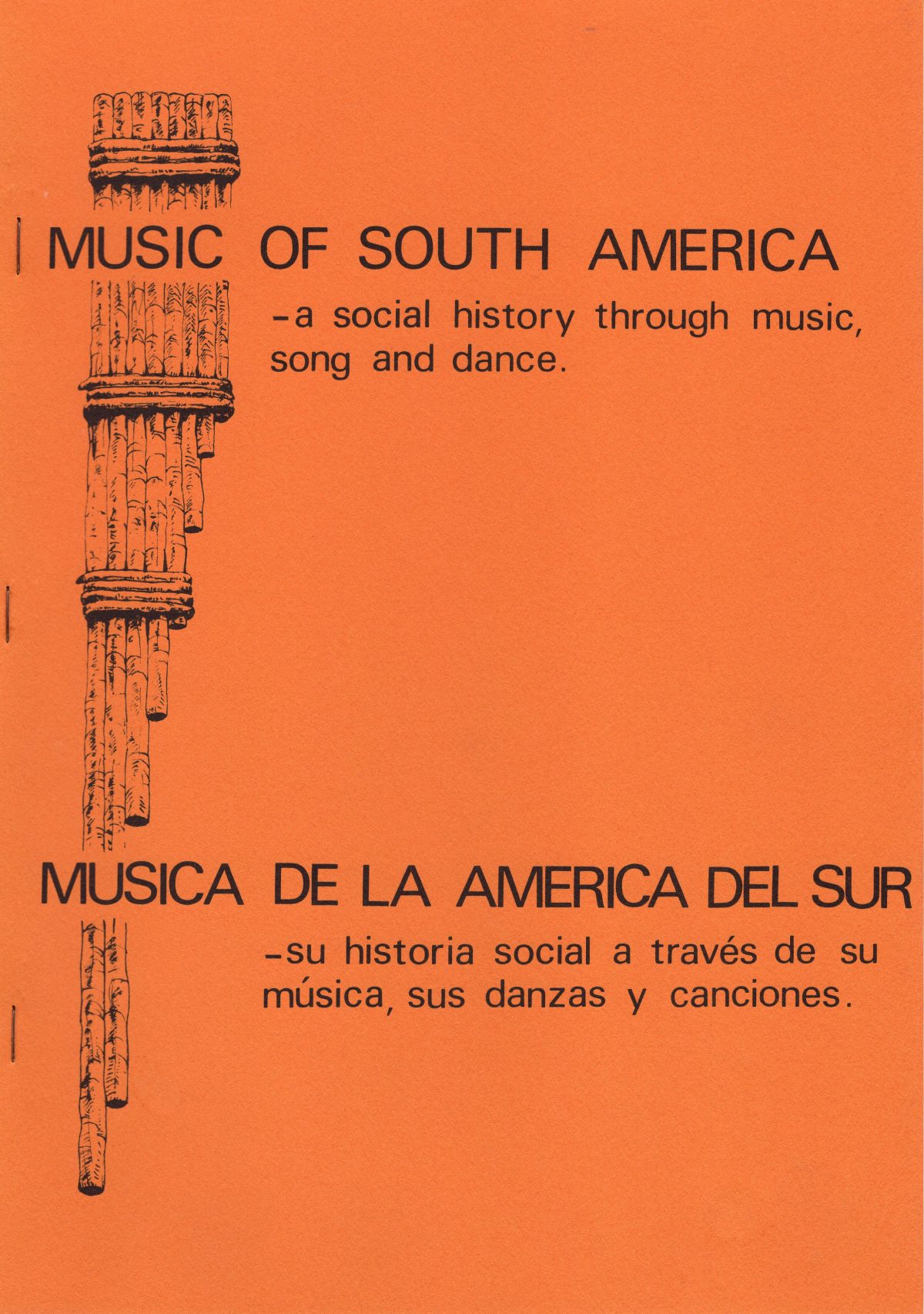 The 1980 concert program began with a South American Boîte, marking a shift away from concerts featuring musicians from various backgrounds to a format that delved more deeply into the musical tradition of a particular place or culture.

This enabled The Boîte to produce more detailed booklets, for distribution at these concerts. While enjoying the live music performance of Apurima, Argentinian Tradicion, Candombe, Duo los Andes at the Collingwood Education Centre Theatre, audiences at the South American Boîte could read about the ‘African influence in South American music, Argentinian gaucho dancing and the background to the development, in Argentina, of the tango.’

Themed concerts would be a lasting feature of The Boîte program. 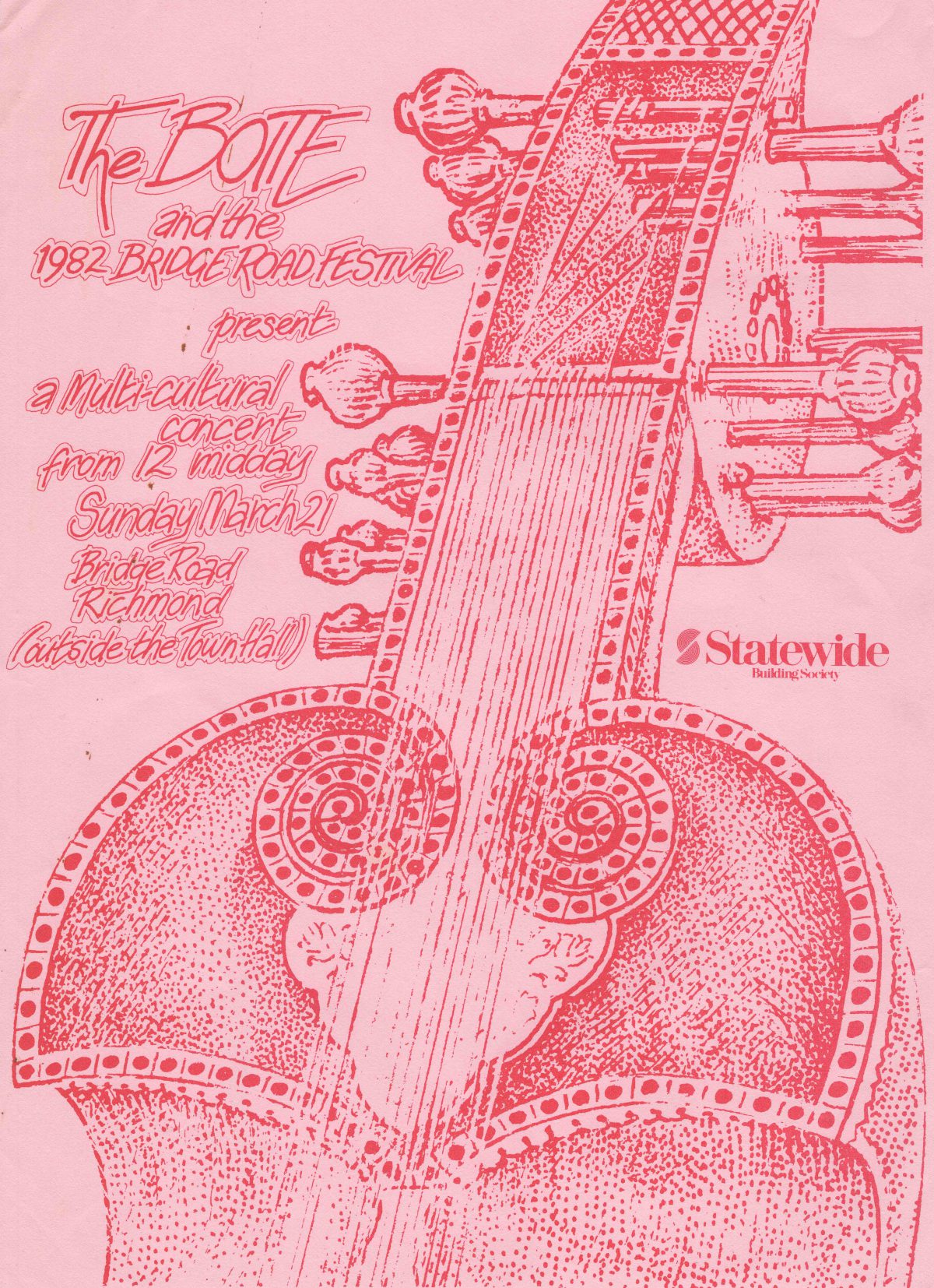 In the year in which the City of Richmond was celebrating its centenary, The Boîte presented a concert at the Bridge Road Festival in March 1982.

The concert featured performances from local Turkish children, Timorese and Indo-Chinese children’s dance groups as well as musicians from the Lebanese, Vietnamese, Turkish and Greek communities.

The concert also featured a short play written by Morag Loh to mark the centenary – Glimpses of Richmond 1840 – 1980.

In 1983, The Boîte hosted events in a range of settings and various formats with a focus on stretching the experience of the audience to participate in various ways, from Irish dancing instruction and demonstration events to Indian Boîtes hosted in a restaurant along with a four course meal.

A significant boost in funding in 1983 had allowed for the hire of permanent part-time staff. The organisation’s capacity to bring strong production values to events were bolstered by the appointment of Coordinator Peter Leman, a musician himself with experience in event production. The first concert Peter organised for The Boîte – a Latin American concert at the Universal Theatre – was a highly popular event. 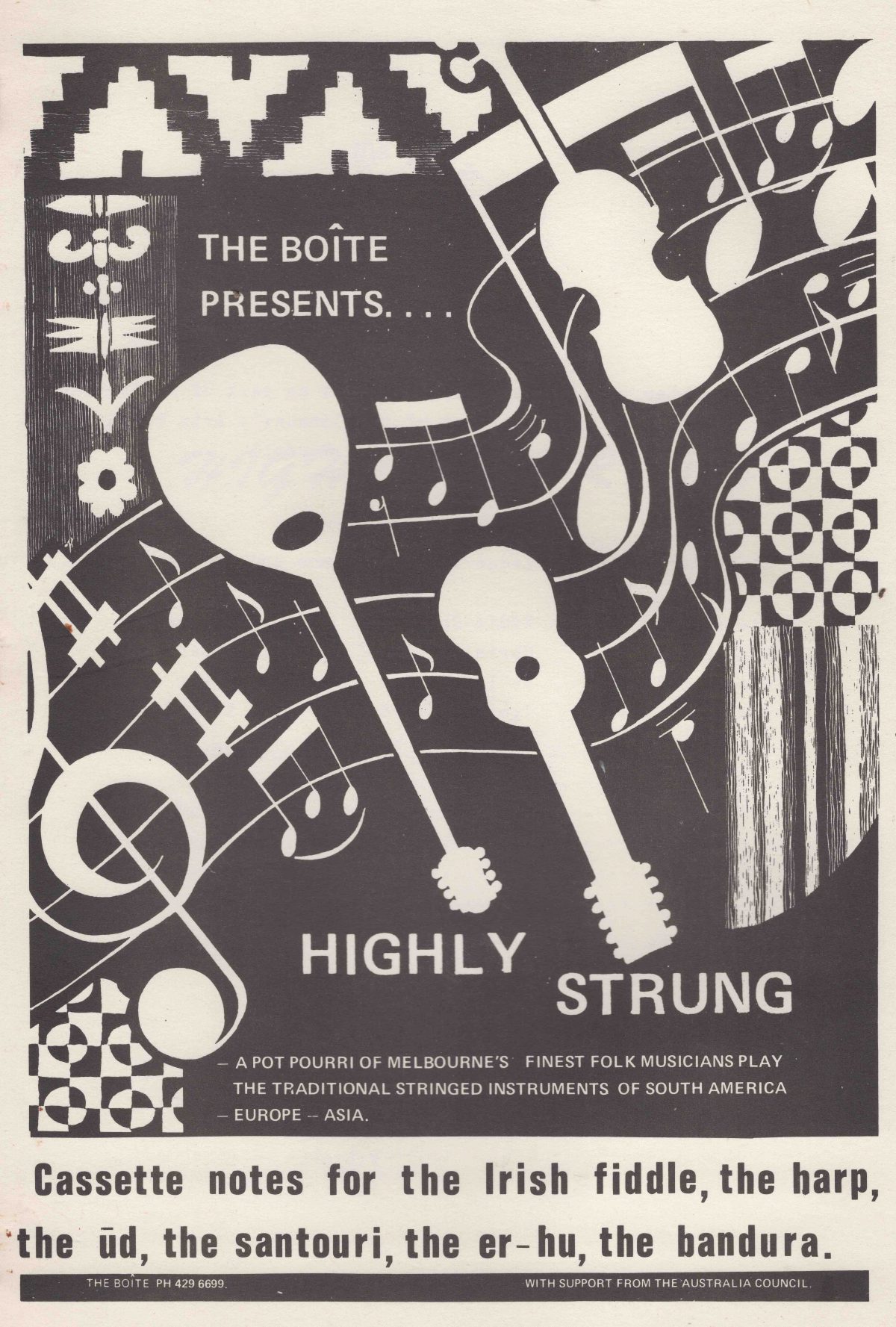 Cover of Highly String Booklet from 1983

The cassette was launched at a concert at the Universal Theatre, Victoria Street Fitzroy on October 30th, 1983 with a diverse and distinguished line-up of musicians featured on the album, including Paraguayan harp player Alfirio Cristaldo, Chris Fakos and Chris Karkanaki originally from Greece on santouri and bouzouki and Ukrainian bandura player Igor Jakubowicz.

A press release announcing the concert explained the ethos behind the project: The Boîte strives to set whatever music it presents in its social context, rather than stage a spectacular parade of migrant performers, which leaves the audience uninformed about what it is they are seeing and hearing. To this end we have recorded all the artists performing at the Highly Strung concert, and the cassette will be available at the concert, along with a comprehensive booklet which looks at the development of stringed instruments around the world.


Listen to Alfirio Cristaldo, who featured on The Boîte release Highly Strung, performing Galopera (from Kalluka, later produced by The Boite).

In 1984, The Boîte hosted a series of workshops for musicians at the Faculty of Music, University of Melbourne.  Participants were offered a unique opportunity to be tutored by accomplished musicians such as Ashok Roy, one of the leading sarod players in India; Con Tsicaderis’ Rembetika Group ‘one of Melbourne’s finest Greek bands’ or Chilean born percussionist Alex Pertout.

In 1985, The Boîte found a place on the Port Fairy Folk Festival program, bringing Latin American band Chichitote, the virtuoso harp player from Paraguay, Alfirio Cristaldo and Andrew Rigby to perform, along with sarod player Yaqub Ali Khan, tabla player Debu Phattachrya and Costas Tsicaderis and band. As was announced in The Boîte newsletter:

‘Many claim this to be Australia’s premier folk festival. The Boîte is hoping to enrich its multicultural flavour through a number of workshops and concert spots.’

At this time The Boîte was playing an important role in opening up what were traditionally anglo-oriented Folk music events to musicians from other cultures. In the year earlier, they had organised a Forum at the National Folklore Conference focusing on the multicultural aspects of folklore. The Boîte also scheduled the Music on the Move concert to coincide with the Conference, presenting: ‘An exciting blend of Greek, Russian, Chilean, Irish. Paraguayan and Australian music – illustrating what happens when it moves from place to place.’

In 1988 The Boîte took to the airwaves at 3PBS FM. The Boîte committee had a keen awareness of the power of radio as a platform to present and support diverse music and musicians, since the establishment of The Boîte in Melbourne. By the mid 1980s, community radio in Melbourne had strongly cemented its central role in offering opportunities to broadcast the diverse voices of Melbourne and The Boîte had been seeking opportunities for coverage on programmes such as The Folk Show on 3CR (Community Radio), 3 PBS FM’s Mainly Acoustic and Rick Vengeance’s The Old Folk Show on 3RRR FM.⁠

In 1987, The Boîte had a taste of radio programming, when Raymond Mow, presenter of Mainly Acoustic on 3PBS, offered two consecutive programmes to feature The Boîte. These Mainly Multicultural features provided an opportunity to profile musicians The Boîte had worked with and discuss the work of the organisation. This led to offers of a regular program by management of PBS. In March 1988, after considerable planning, and securing funding from the Music Board of the Australia Council for a radio project, The Boîte launched a 10 part series, produced and presented by The Boîte member Gwenda Davies (with one program produced by Paul Petran and Steven Snellerman of the ABC’s Music Deli) featuring music from The Boîte collection, interviews with local musicians and local arts organisers and and live performances.

Following the series, the program continued with The Boîte committee member Greg Caulton presenting for the rest of the year. Roger King then became presenter, before Therese Virtue took up the microphone, beginning a career in radio that continues to this day.

The Boîte would continue to broadcast with 3PBS for 16 years, before joining 3CR in 2006 with Music Sans Frontières. The Boîte has always had a strong focus on presenting a high volume of local content from culturally diverse musicians through their radio programming.

After ten years at the Richmond Community Education Centre, a change of address for the Centre along with some organisational changes, meant that The Boîte needed to find a new home. After staging a highly successful 1988 New Year’s Gala attended by nearly 500 people at the Mission to Seafarers in Port Melbourne, The Boîte accepted an offer to take up residency there in 1989.

The building was in need of substantial repair and its future was uncertain, with substantial redevelopment of Port Melbourne proposed at the time. However, it offered suitable performance spaces and perhaps some historical alignment given it stood where immigrants to Melbourne had once disembarked from ships to arrive at their new home.

In the 1986 Annual report, The Boîte described their optimism for the potential of the venue:

‘The bold stature of the building cannot disguise the signs of neglect: Uncut grass, broken window, peeling paint and unpredictable plumbing to name but a few. But there are signs of a new lease of life. A high carving at the entrance, a fresh coat of paint in the chapel and posters advertising forthcoming art classes…. our expectation is that the Seamen’s Mission will become a thriving, community arts centre within a year.’

Despite this positive outlook, The Boîte’s tenancy would only last a short time, with The Boîte relocating to the Uniting Church building at 123 Napier Street Fitzroy, where it would stay for 21 years. 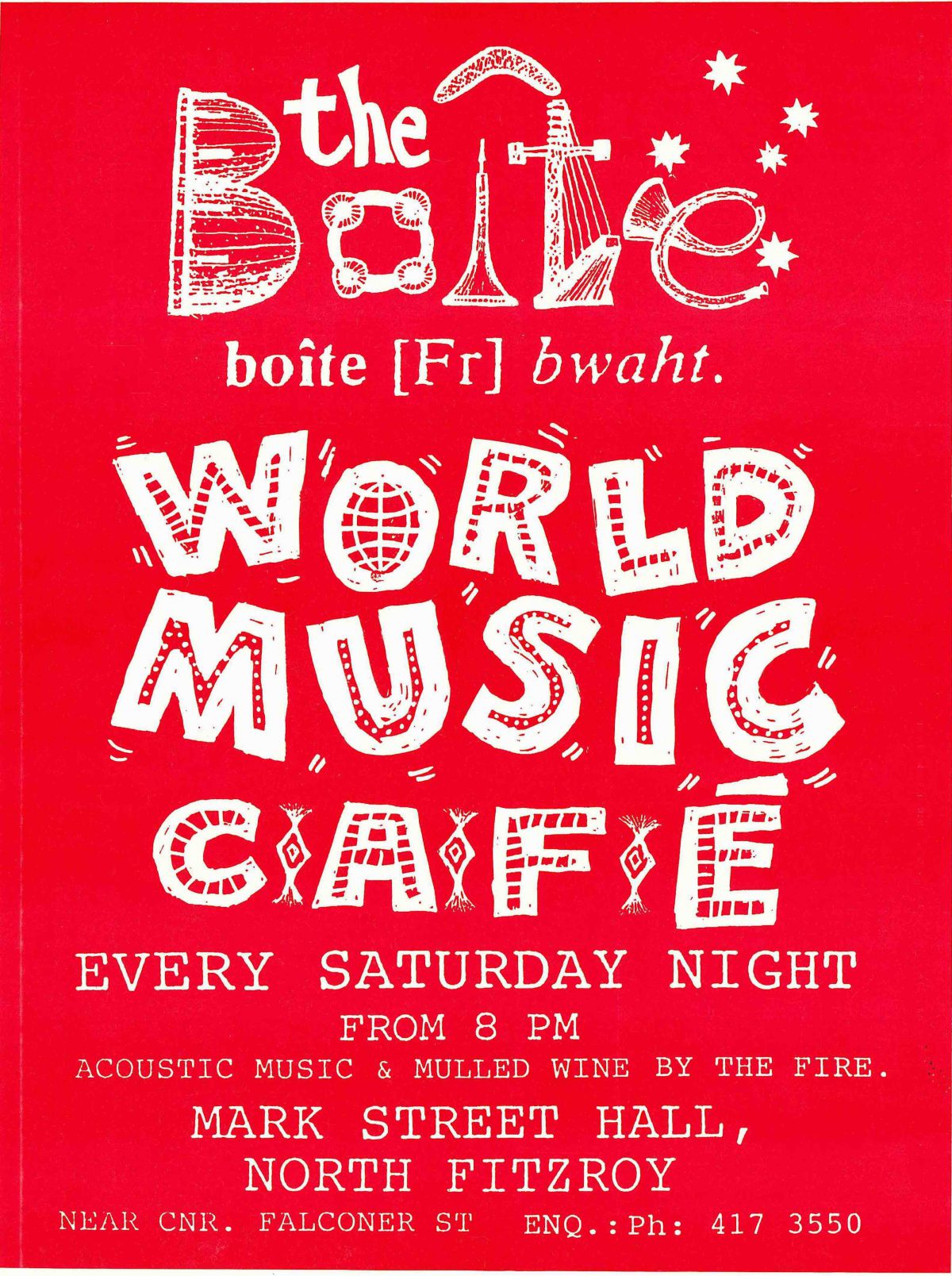 The World Music Café has been described as the ‘heart of The Boîte.’ It was established in 1989, in order to host regular, intimate, acoustic concerts. Not only did this model make sense from a production perspective and allow performers to build an audience through regular performance opportunities, the acoustic nature of the event has suited a genuinely diverse cross-section of instruments and musical styles.

Before then, The Boîte had developed earlier incarnations of a smaller concert offering. In 1986 Therese Virtue was pleased to report to members that a small grant was enabling the realisation of a long-standing goal:

The Boîte hosted the first Musicians’ Clubnight at the Fitzroy Community Room on Friday the 27th of March 1986. In 1989, a similar project evolved when the Chapel in The Boîte’s new home at the Mission to Seafarers provided a suitably intimate venue for the World Music Club.

By 1990 The Boîte had launched the World Music Café at the Mark Street Hall, North Fitzroy. Close to the new office of The Boîte at the Uniting Church building in Napier Street, the new venue offered the intimate atmosphere The Boîte had been seeking to capture at these events. The World Music Café at Mark Street has been an enduring venue. It has offered countless local musicians the opportunity to build their audience, launch CDs, and enjoy the intimacy of a venue that allows the appreciation of instruments and musical styles from all over the world. It has also played host to international, touring musicians. For audiences, the World Music Café has been a welcoming, relaxed space in which to enjoy a unique opportunity for a close-up, high-calibre musical performance, while partaking in the Café’s trademark mulled wine by the fireplace.

In 2006, the World Music Café expanded to Box Hill Community Arts Centre and BMW Edge. Around this time, The Boîte worked closely with Jeffrey and Gai Woolhouse to support the presentation of concerts through the Surrey Music Cafe.  In 2011, The Boîte took on the role of supporting an existing monthly concert hosted at St Margaret’s mud brick hall in Eltham. World Music Café events have also taken place at the Northcote Uniting Church.

Over the years the World Music Café has been coordinated by a number of staff, Therese Virtue having played a central role in its development as a unique concert experience.