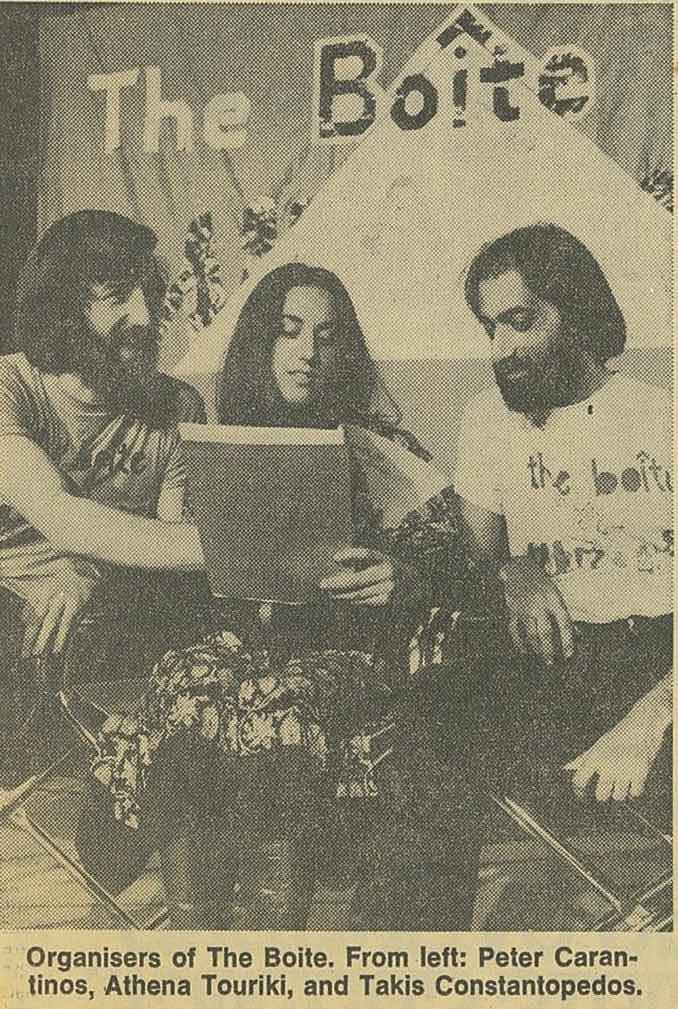 On the 18th of January 1978, a crowd of 350 people packed the Australian Music Centre at The Rocks, Sydney for a concert featuring Greek Musician Timotheos Arvanitakis, David Gulpilil, the Italian Group Bella Ciao and a Spanish classical guitarist. It was the first concert of The Boîte, formed by three university friends Peter Carantinos, Athena Touriki and Takis Constantopedos.

They were inspired to host the event following the success of a concert organised by Peter as part of the Carnivale ’77 program, featuring then unknown composer Arvanitakis. The three had originally planned to host the concert for friends in their own backyard, but soon found themselves scouting for a larger venue as it became clear there was significant interest. A series of fortnightly Boîte concerts at the Australian Music Centre followed, featuring music from around the globe, attracting healthy crowds of mostly second-generation migrants.

The Boîte began making an impact very quickly. The program for a March ’78 Boîte concert boasted the following quote from Al Grassby the former Minister for Immigration under the Whitlam Government, credited with introducing the policy of multiculturalism to Australia:


‘The Boîte is the best manifestation of Australia’s cultural revolution. It holds promise of helping to make Australia a more live, vibrant community.‘

Following a successful first year of The Boîte in Sydney, the committee decided to spread their wings and expand the organisation to Melbourne in 1979. They had begun working with Melbourne artists in 1978, hosting a concert of Greek music at Melbourne Collingwood Town Hall and an art exhibition of the work of Melbourne-based Greek artist George Michelakakis, at the Bondi Pavillion. Peter Carantinos reached out to Melbourne friends George and Cavel Zangalis to lay some roots for the Boîte in Melbourne.

Cavel Zangalis was working at the Richmond Community Education Centre at the time, which provided a natural fit for The Boîte as its first home in Melbourne and where it would stay until 1988. In the words of Melbourne Boîte founding member Alex Butler:

‘It’s very hard to imagine it actually having happened, if it wasn’t at the Richmond Community Education Centre really, because that, that was the kind of hub of multi-cultural creativity at the time.’ 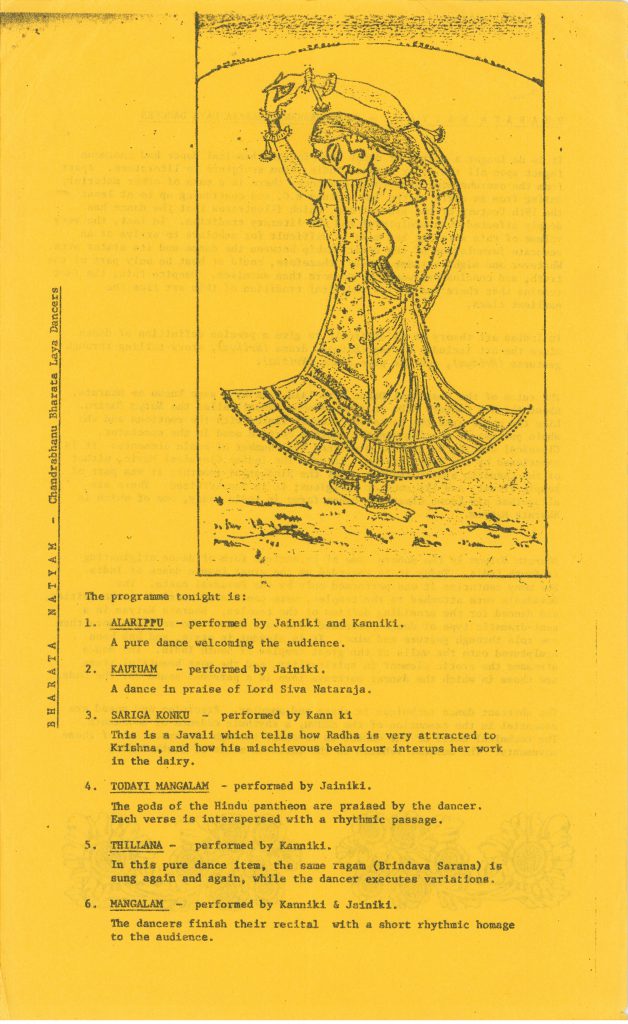 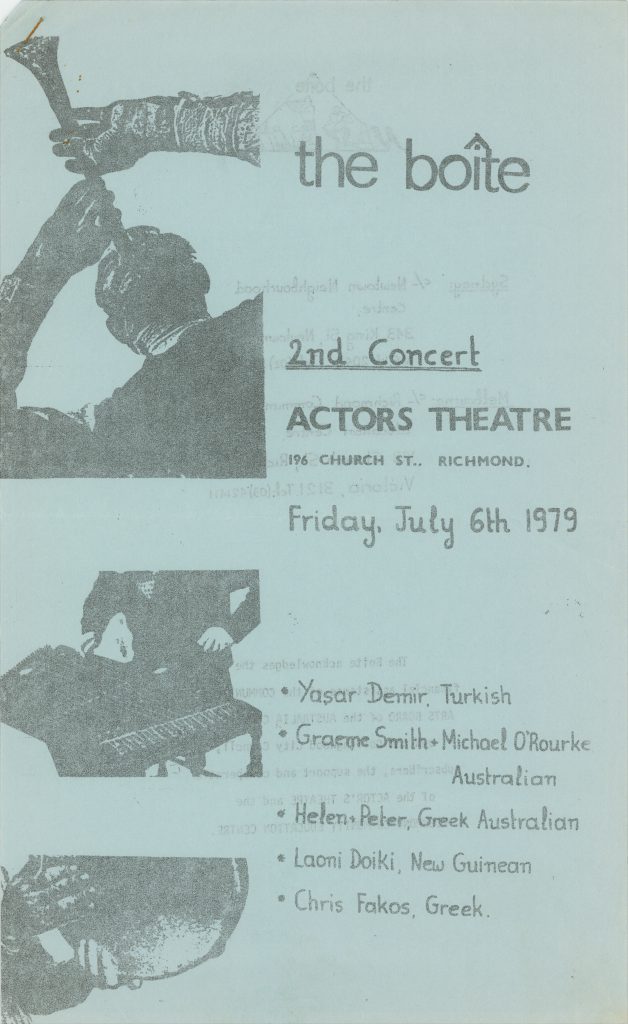 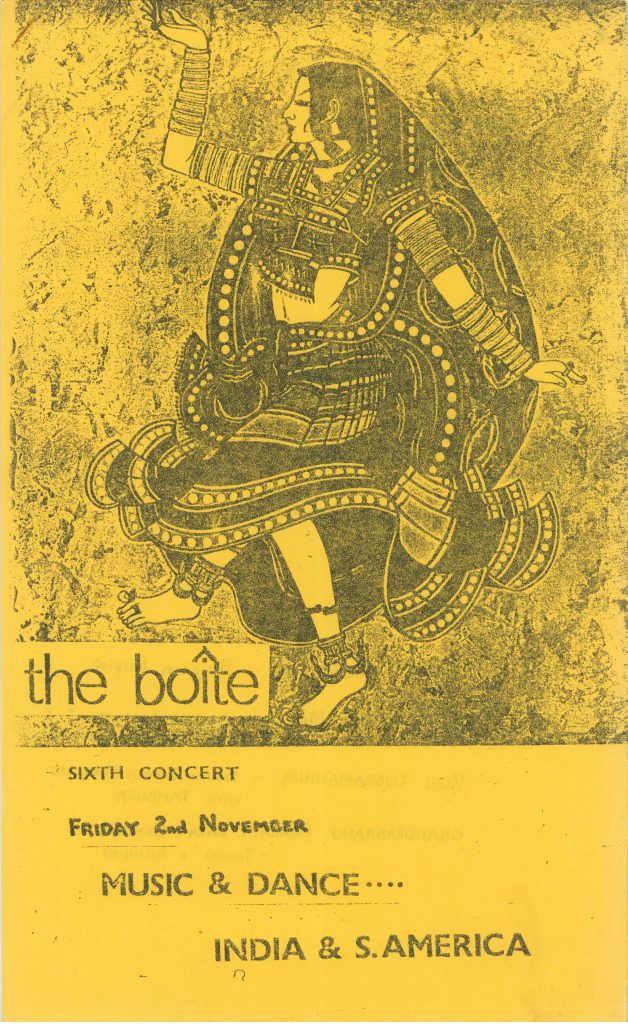 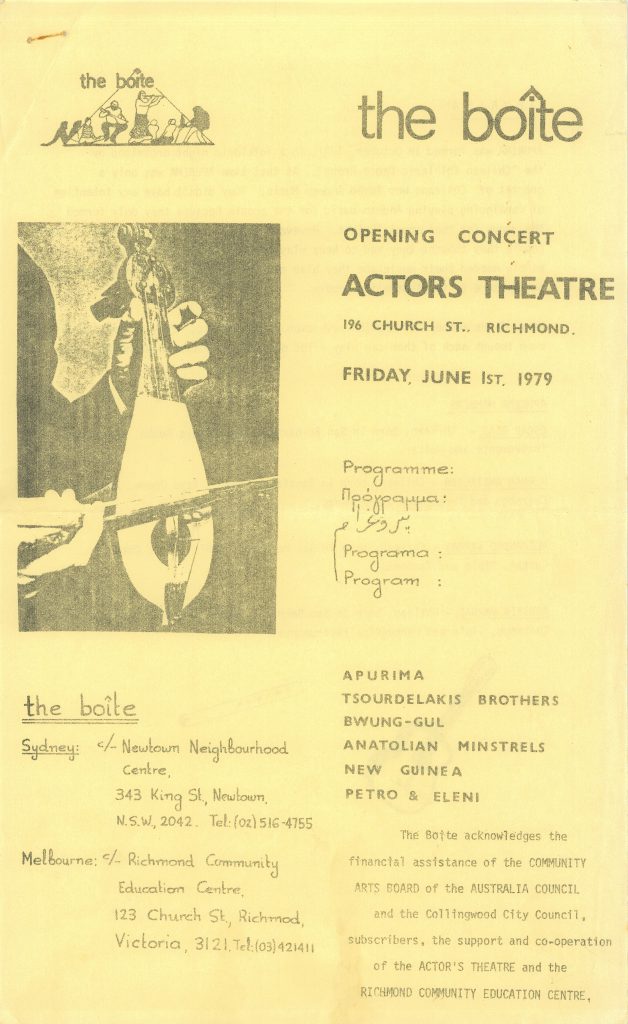 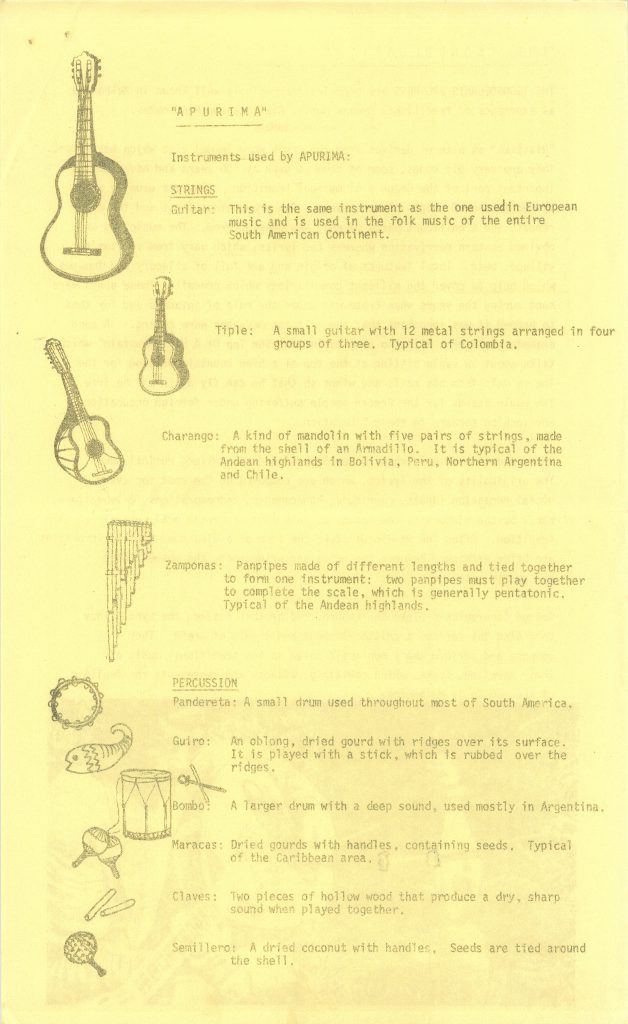 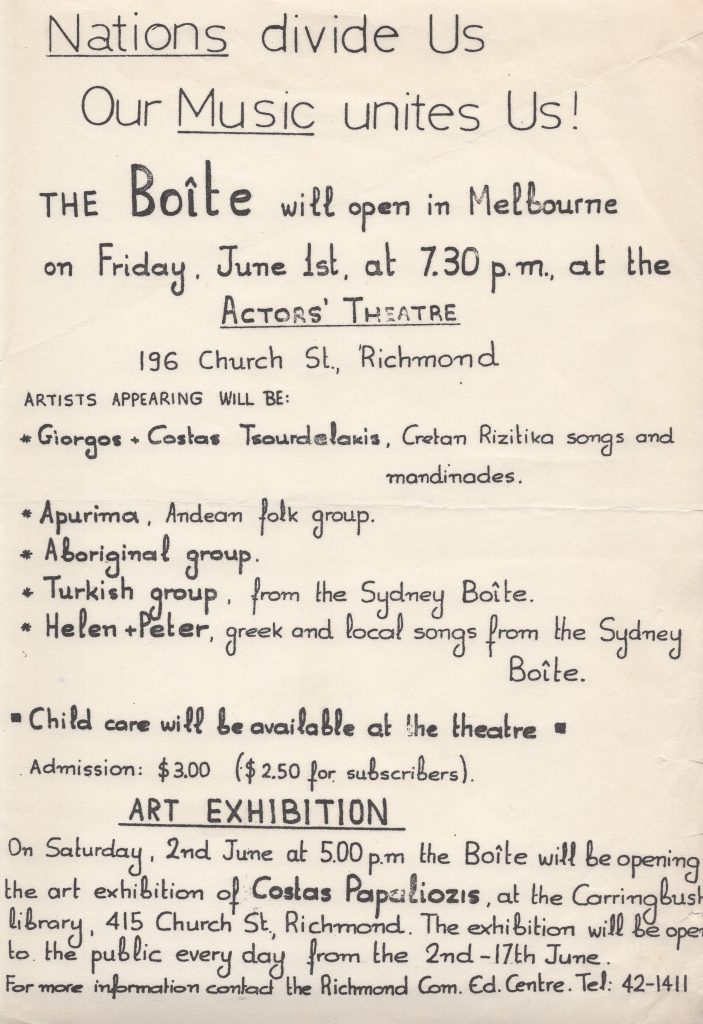 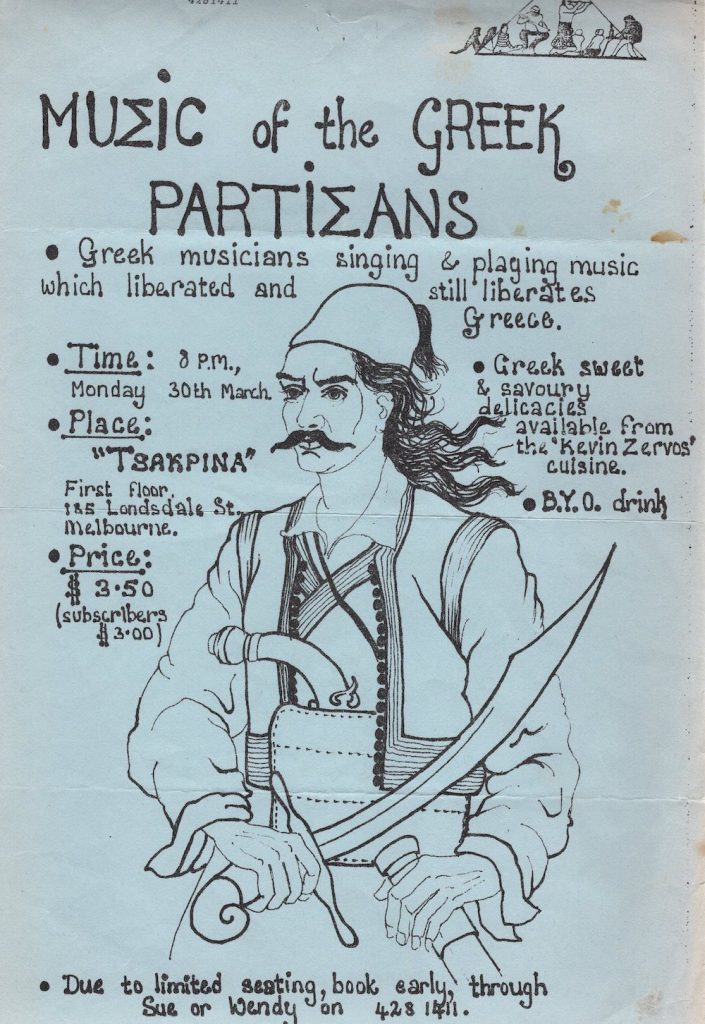 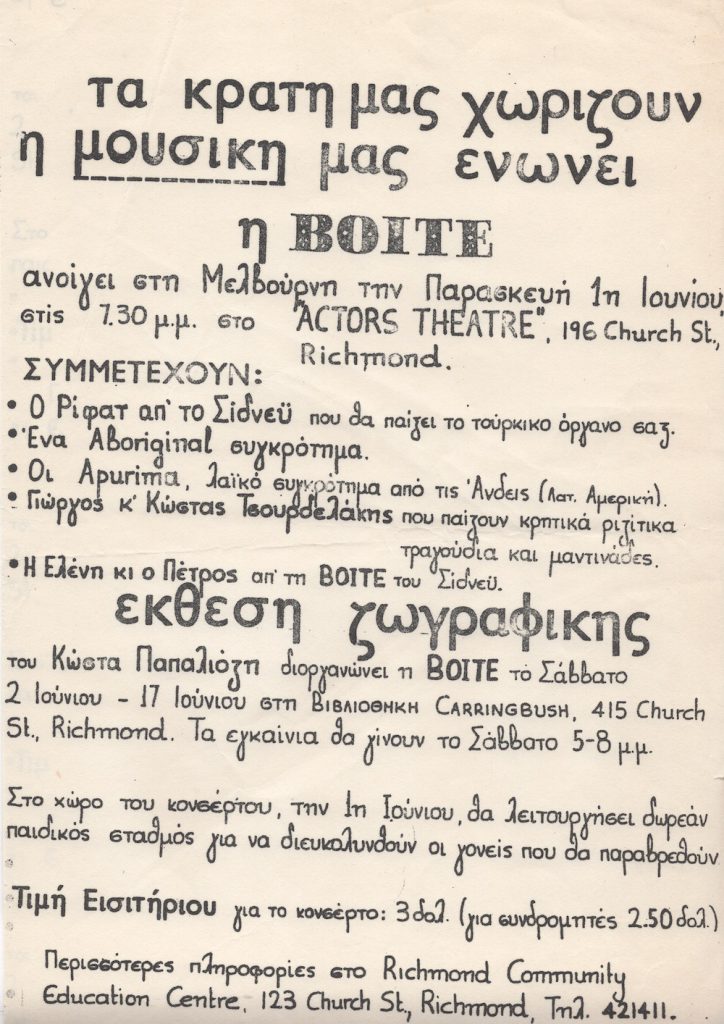 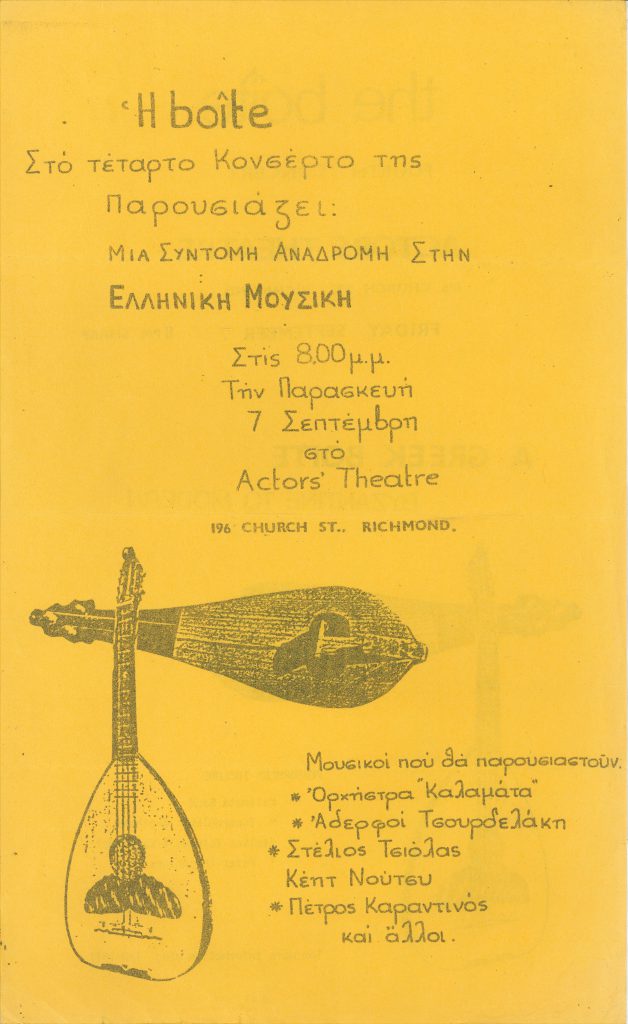 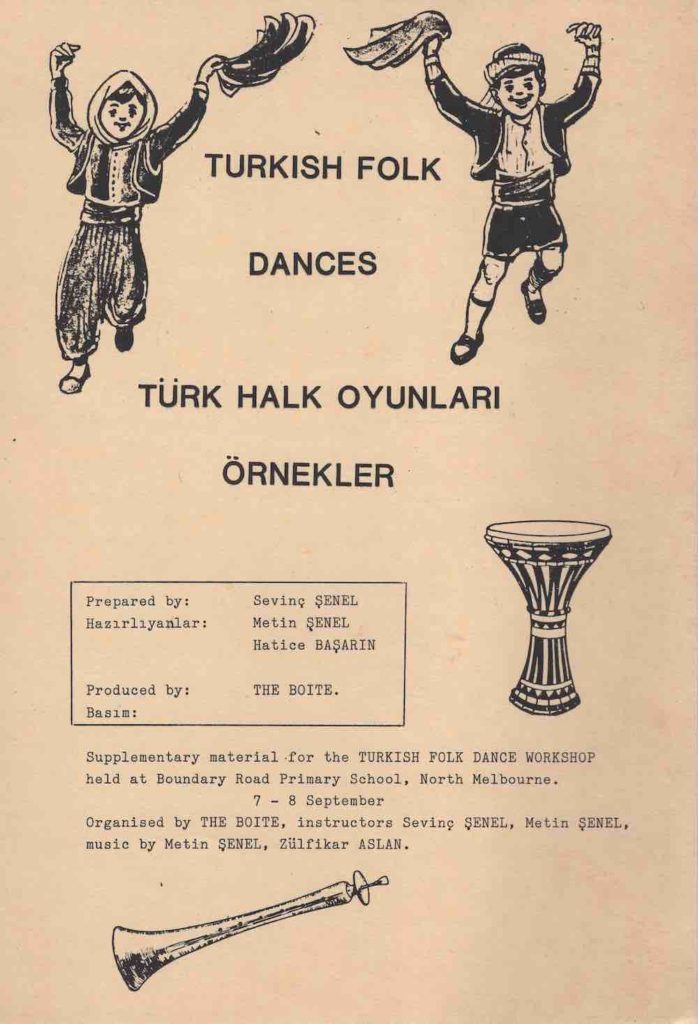 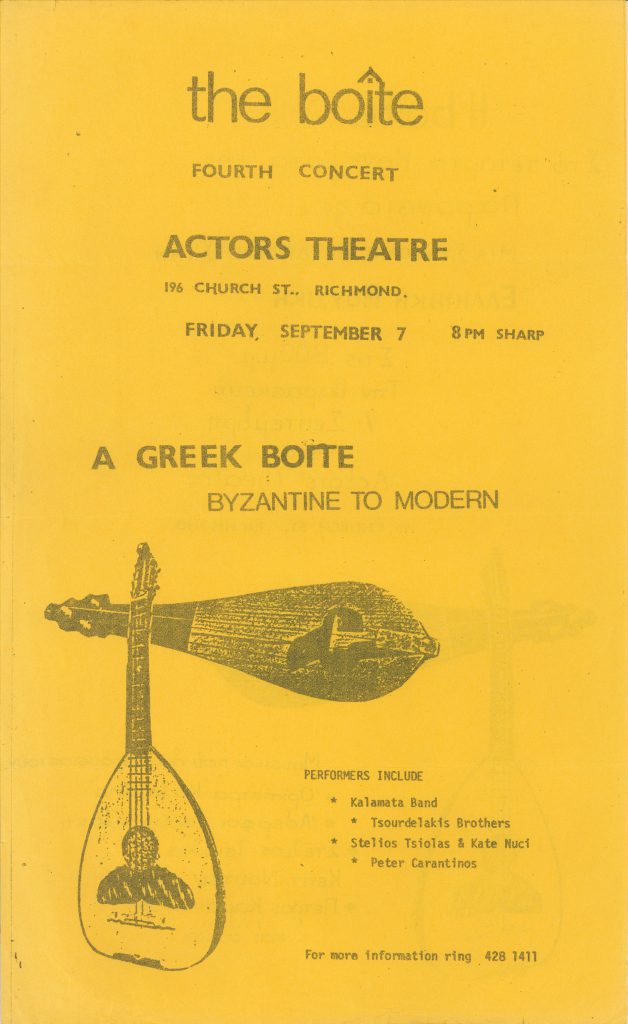 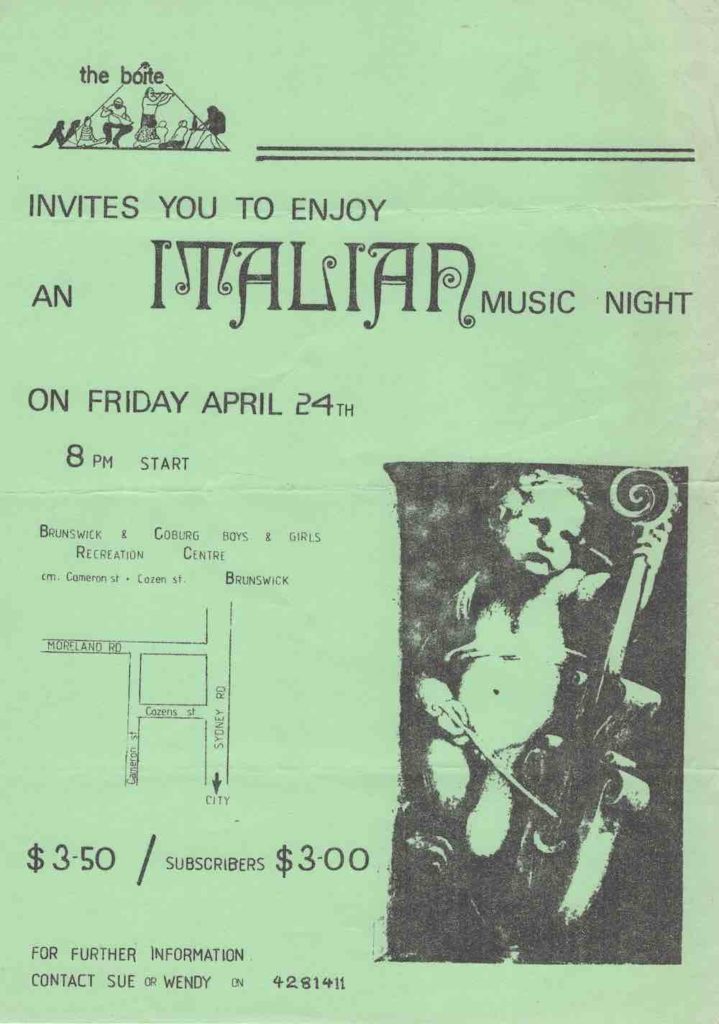 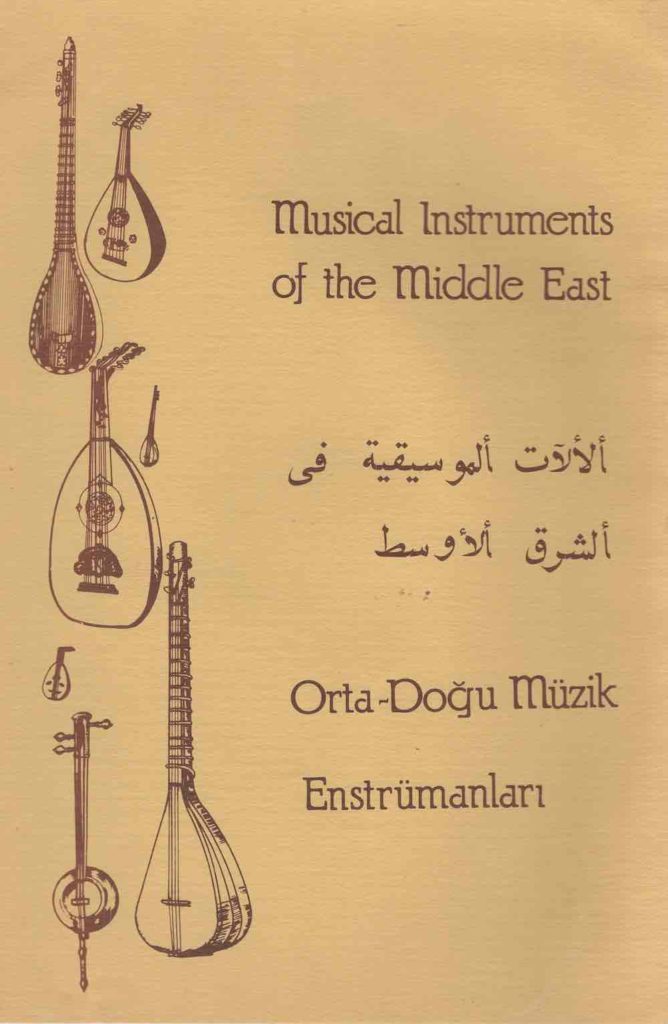 A Melbourne Boîte committee was formed and began the ambitious task of planning monthly concerts committed to educating audiences about the rich cultures and musical traditions musicians brought with them when they migrated to Melbourne.

On June 1st 1979, the Melbourne Boîte hosted their ‘opening concert’ at the Actors Theatre in Church Street Richmond. An intimate venue, the Theatre sat at the rear of the office of the Victorian Parliamentary Member for Richmond, Theo Sidiropoulos, who just a year earlier, had introduced himself with pride to the House of Representatives, ‘as its first non-English migrant member.’

To the performers, the concert provided a welcomed opportunity to play to a new audience. To members of the committee, the concert was launching a new program of monthly concerts designed not only to entertain, but to educate audiences about the rich cultural heritage migrants were bringing to the Victorian community.

To some members of the Melbourne committee, who were active in a broader struggle to assert the cultural rights of migrants in Melbourne (in the areas of education, ethnic broadcasting and workers rights) the concert also represented an act of political defiance following the 1977 closure of multi-lingual Access radio station 3ZZ by the Fraser Government:

And so began a program of monthly concert events at which audiences were provided with detailed programme notes to educate about the musical traditions and instruments featured in performances, as well as aspects of the social and political history of the countries of origin.

An early source of funding came from the Schools Commission through an ‘Innovations Grant’, enabling the Richmond Innovations Project in 1979. An early Boîte flyer explains – ‘The Boîte is committed to the promotion of multicultural music in schools…[and] is attempting to incorporate this multicultural oral tradition within the School Curricula, starting with Social Science, Music and Community Language syllabi in Sydney and Melbourne.’

Within its first year in Melbourne, The Boîte hosted concerts at the Great Hall at the National Art Gallery. In September, The Boîte presented A History of Greek Music, followed in October by the Music of Migration concert – a partnership with the Boîte in Sydney exploring the music of migration of Greek, Turkish, Italian and Irish traditions.

The Music of Migration concert was accompanied with a detailed, researched booklet providing historical and contextual information not only to inform audiences, but also as a resource for schools. In his introduction to the booklet, Peter Carantinos (Coordinator of the Boîte in Sydney) explains how music contributes to our common understanding of the past:

‘It is perhaps more correct to call it an alternative history of migration as music gives us a sketch of our past, and present, that differs from written history. The song can complement the written work – often it rivals it. The street, the field, the village and the sea have always sung while the palace, the office, the church and the university wrote.’


Listen to The Italian Folk Ensemble performing at the Music of Migration concert, 1979